The world recently lost several bright stars who suffered from drug and alcohol abuse.  For those of you who understand the addiction downfall a philosophy, you know there is enormous pain behind every affected soul.  They fight, at any cost, to subdue the chronic pain they carry within. But most addicts lose their battle - just as these now dead stars lost theirs personal battles with their addictions. 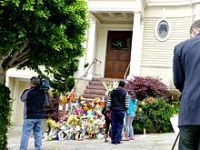 Addiction can emerge in any form, such as compulsive gambling, excessive sex and shopping or shoplifting, even among rich and famous. I am not going to mention their names, they know who they are.  Ironically they have enough capital to buy the whole store, but this is addiction. The rush of adrenalin no doubt played a major part in their senseless actions - whether addiction to overeating or being shamelessly promiscuous and even the sickness of pedophilia!

The covert pedophilia ring, which is currently coming to light, exposing the British Parliament, mostly the right sector, is a huge scandal under leash.  But the investigation is still ongoing and the names will be soon released.  One is Cliff Richard who quickly gave up his U.K. citizenship, before he could be indicted.

Thus information is available on Google, if you are interested in both reports.

Getting back to our colossal losses, let's take a closer look. The following is what I describe is "pop phycology."

Case number one: Phillip Seymour Hoffman was a phenomenal actor and skilled producer who overdosed on heroine February 2, 2014.  He began using drugs and heavy drinking while studying at New York University.  At twenty-two he completed a rehab program and remained sober and drug free for twenty-three years. Sadly, he slipped in 2012.  Mimi O'Donnell, his common law wife/partner of 14 years split with him in October. He still had access to his three children; he doted upon them.  I witnessed his radiance when he was around them.

I knew Phil and ran into him a week before his final days. He didn't appear in despair.  We chatted. With a broad smile on his face, he mentioned he was heading to Atlanta. I didn't detect any drug use from his behavior. Was it a public display image, behind a suffering soul? Phil had an enormous fan club and loyal friends. Why did we lose a beloved, worldwide acclaimed actor in the bloom of his brilliant career? Loneliness! If he was living with his family, perhaps he may still be with us!

Case number two: A long time lover of Mick Jagger, beautiful fashion designer L'Wren Scott ended her life abruptly on March 17, 2014. The media told that she was abandoned at an early age, adopted by a family of ultra conservative Mormons and grew up with other adopted siblings. Did a young L'Wren harbor an aching pain for her real mother? The rumor, not a fact, surfaced that she had inherited her mother's Marfan's Syndrome, a genetic disorder, which doesn't affect intelligence, but can be terminal with aging.  Can this be one of the reasons?

L'Wren was a successful businesswoman, young and gorgeous, with long-terms of dream deals in her fashion empire.  She was on demand! Mick who appreciated her exquisite taste, wore her designs, tailored by her personally. He was known for being a notorious substance user.  Did they share the same habit? Twelve years spending together is almost always hard to avoid! When the news broke, the horrific story that L'Wren Scott hung herself with the help of a stylish scarf, my first question was, why? Knowing that Mick diligently brought her on every tour, I kept asking myself why was she not with him at this time when he took off to Europe and Australia?

Were they on the verge of breaking up? Taking time away from each other?

The rumors that she was financially broke proved the opposite. She made her statement by giving her entire eight million dollars estate to Mick Jagger, including all gifts she received from him during their well-publicized relationship.  To my understanding, she was lonely and utterly betrayed!  This led her to insecurity and deep depression. The way to punish Jagger was through her death.  She succeeded, Mick felt miserable, although not for long.  But she made her point.

Case number three: Behind the smiling face of Robin Williams, I saw tears. In public he was endlessly entertaining and perpetually laughing.  But how happy was he?

As a child he was a shy boy, often searching for his parents' affection.  His mother was a model, Lauren McLaurin. His father was a senior executive at the Ford Motor Company.  Both were preoccupied with their careers. Young Robin noticed when he crafted characters creating the imaginary voices, his parents laughed and that was his moment of rare closeness with them.  This I learned from one of his interviews, about two decades ago.

Through the voices and characters he created, he reached to their hearts but, neither his mother, nor his father would listened to him when he was himself.  The teen worked tirelessly to entertain his distant mother and eventually grew into the grown-up Robin, a first class, unmatched comedian and true star. With so many successful films and loads of money, Robin fell prey to cocaine and scotch to stay funny and creative.  After he quit cold turkey before the birth of his first child, he was still funny and creative.  But he still had his childhood scars, thanks to his self-centered mother. And depression slowly took over, spreading like cancerous cells throughout his rapid mind.

His first marriage failed due to his involvement with his son's nanny, Marsha Garces, of Filipino origin.  Some nannies are notorious for breaking up families, advancing their life changes while focusing and seducing wealthy men.  Just to name a few, consider Arnold Schwarzenegger, late Michael Kennedy, Ethan Hawke! When everyone stoned Michael Kennedy, I firmly took his side! The reason?

I knew one nanny, who was thrown on the street, after a loyal husband reported to his wife: the young, illegal Ukrainian immigrant that they gave a shelter and offered a babysitting job with a decent salary, tried to seduce him.  That's classic!

Robin divorced his first wife and married Marsha who was already pregnant with his child. Were they happy in love? Years ago, I spotted them and another female companion in the Bemelmans Bar at the Carlyle Hotel. What startled me was that Marsha and her friend were chatting and laughing. Robin was excluded from the small talk conversation, remaining quiet. I knew their marriage would not last, as there were no connections between the two, or chemistry displayed. He was trapped like a fly in the spider's web.

When heart-breaking news burst out on August 11, 2014, I felt outraged and stunned! I fell for Robin Williams from the time I saw his first movie. Later I watched all his films and tried not to miss any of his hilarious interviews.  He was the God of comedy! Also he played serious parts in the movies astonishingly good! First question I asked, why? Where was his wife at the time of his suicide?

His third wife, Susan Schneider, released the following statement: "This morning, I lost my husband and my best friend, while the world lost one of its most beloved artists and beautiful human beings. I am utterly heartbroken. On behalf of Robin's family, we are asking for privacy during our time of profound grief. As he is remembered, it is our hope the focus will not be on Robin's death, but on the countless moments of joy and laughter he gave to millions."

I sensed that something was wrong with this wording. Did she want to halt inquirers regarding what went on in Robin's last twenty-four hours of his life in dissection? Where was she when he died? I kept repeating this question over and over in my mind.

The next day the report confirmed my worries. Apparently the graphic designer slept in a different room throughout the night and didn't bother to check on her husband in the morning, leaving the house and going out. Where to? Another day came and a new release from Susan Schneider. This time it was about Robin's early stage of Parkinson's disease. So, why did she release this information knowing that Robin guarded it from his fans?

Why?  Now, what do we know about Susan Schneider, besides that she is a graphic designer? In my view, perhaps this mysterious woman married Robin for his money while he still was hot in showbiz. His contract with the CBS show, "The Crazy Ones" was suddenly canceled, to my dismay. I loved that show. According to his cast members, Schneider never showed her face in the studio, while everyone else brought their entire families to watch the taping of the show.

Was she punishing Robin toward the end of his life because of his difficulty to earn money and give her what she wanted? Robin's two previous marriages bled his bank. It was not a laughing matter, but he managed to joke about it at his first opportunity.

All Robin wanted is to be loved by his women. He got love from the entire world, but not from the members of his broken families. Did his third and last wife add pain to his suffering soul?

When Robin ended his struggle with his pain, he chose the same method like a tragic L'Wren, only with his belt.

All of us need "Awakening" and words of love in times of our struggles with insecurities. It looks like every woman Robin encountered failed him, beginning with his own mother, with the exception of his devoted assistant, Rebecca Erwin Spencer who found him dead!

The last things of humanity Robin Williams did before he ended his misery: he sent a cheerful video to a cancer stricken young woman to fulfill her bucket list.