Corruption on campus: Fastbuck operators assigning their own textbooks 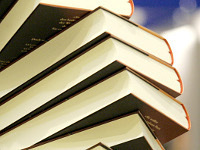 In the decades since World War ll, many American college students have rightly complained of obscure textbooks. The American publishing industry, a complete failure, has produced a superabundance of unreadable books hastily written by college instructors for a quick profit; the only reason that the books were published in the first place is that the college instructor could guarantee a captive market for his book-namely, the students in his own courses! There is the clunker books Economics: Theory and Practice (Welch and Welch), and Social Research: The Craft of Finding Out (McCall and Simmons), but there should not have been the books.

Despite having an obvious conflict of interest in assigning their own texts, college and university professors and teachers are allowed to do so, and hence taking in royalties from books forced on customers who have no choice. The practice has resulted in the production of superfluous titles in one subject after another-biology, algebra, English composition, American history-and of many thousands of useless books entitled Introduction to Chemistry, Foundations of Economics, College Algebra, and so forth ad infinitum. There is no need for thousands of beginning economics texts, most of which tree wastage should never have been published, when there are a dozen like the famous Samuelson and Nordhaus Economics that will do. How to balance a chemistry equation must be explained carefully, but hundreds of thousands of college graduates have complained about obscure chemistry texts that do it wrong.

Gone are the days when the industry published Hemingway, Dos Pasos, Faulkner and Sinclair Lewis, and it no longer "takes a chance" with talented new authors. The economic slump of the 70s brought retrenchment to publishing, with unestablished writers finding it almost impossible to get published. Further retrenchment and corporate consolidation since the 80s in the sick economy have made the business more than ever profit conscious, as it refuses to publish radical works, and headlong oriented to profitable bestsellers like the lamebrain potboiler The Da Vinci Code that can become films, television shows, book-club features, worldwide translations and so on. American publishers are stifled; bookstores are closing down and famous publishing firms face either bankruptcy or monopoly corporate merger, and all too often writers go the route of vanity publication, which is always a mistake.

At the same time the industry is also artistically bankrupt. One only need look at the fiction and nonfiction bestseller lists. The combination of an artistic and financial success is rarer than ever. The publication of incompetent manuscripts of opportunistic college instructors makes each the sovereign prince of his campus, with his book going unadopted by any other campus. Professors often assign a text, which they have not even read, because a friend or colleague asked them to.

Colleague requests are a more tortured form of corruption. A fellow departmental instructor or professor who asks an instructor to use his book in a course is in a bind, since the professor likely will help decide whether the instructor receives tenure; lack of cooperation can easily mean "poor performance." Both the requesting professor and the instructor are aware of the incestuous conflict of interest. When the two are friends it is simple to have one's own text assigned to a course-and give with the royalties. As already mentioned, since the college hierarchy does not interfere, the professor can delegate the book he himself wrote to every course he teaches.

The principal victim of the corruption is the financially-strapped student. College texts are extraordinarily expensive, and assignment of an obscure one compounds the harm. When the publisher comes out with a cosmetically revised "new" edition to boost profit, the students cannot sell their overpriced used texts back to the bookstore. I can still hear the groans and griping at the head of the anxious line at the end of the semester as books are being bought back. Truly, it is "The Student as Nigger," an article by Jerry Farber (1967); the student bears the badge of not being ready yet, of not being good enough, somehow in need of further instruction, and is dumped on. America has never valued education-a fact indicated by the low status and pay of teachers, but it does value credentials and degrees and academic accolades-the trappings of knowledge without the knowledge. In sum, educational corruption has contributed to the universal reign of ignorance in the U.S.