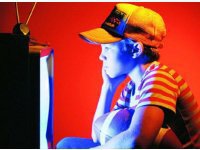 There are lies, damned lies, and then there is American television. The unique contribution to humanity of Television City, located in intellectually blighted Los Angeles, may in the last analysis be forced laughter: guffaws, snickers, cacophonies, forced smiles, titters, near-laughter, Gelächter, I-agree-that-you-are-funny laughter, and so forth. The people seem incapable of spontaneous laughter. If the studio audience (provided there is one), and the performer-participants themselves on television and in Television City could not prevent the outbreak of a few moments of silence, there is of course always the laugh track, which has given all new meaning to the term forced laughter, of which there is an epidemic in the U.S.

The multitudinous television programs filmed in Television City may (A) either have a long immortal celluloid life, since they are the stuff of legend to an enlarged generation of Americans raised on the boobtube. Where the lagoon of Gilligan's Island lay could become a tourist Mecca, and the streets of Mayberry, North Carolina, were they preserved and embalmed, would attract thousands upon thousands of visitors. (B) Or the celluloid could disintegrate, the machinery to watch it could become obsolete and the humor and entertainment unintelligible in another century. I do not pretend to know the ultimate fate of the tomfoolery of Green Acres, the treacle of Mork & Mindy or the contrivances and showboat reasoning of Law & Order.

The world has had many varied cultures, but American culture pioneered the art of forced laughter-as in, to give solid substance to the idea, the "hilarity" of the Dean Martin roasts. That was dangerously taking humor to a dark precipice: Niemand wird tiefer traurig, als wer zu viel lächelt. However, the concept of which that was an extreme form is institutionalized in American culture today. A "laugh" can mean so many different things in the U.S. that it defies description, like the honking of a car's horn. Few Americans stop to think whether laughter is spontaneous or forced, though some strange machine gun like laughters have arisen, suggesting they are more for effect than they are genuine.

The phenomenon is part of the psychologically oppressive impression management (analyzed by the sociologist Erving Goffman and the American historian Christopher Lasch). The laugh track apparently dates from radio and thus the early 1920s. Experience with radio, lacking a video element of course, created many sorts of innovative or entertaining sound-or sound that simply filled in gaps and provided a transition. Then lo and behold the 1940s and television, into which the manipulation of sound spilled over from the radio. The audio part no longer had to fill in time and be continuous; instead, like the musical score of films, it highlighted and dramatized moving pictures. The laugh track and TV sound effects corrupted American culture. The neurotic laughter of shows of the 50s and 60s has been immortalized in a disintegrating culture.

There be three degrees of this hiding and veiling of a man's self. The first: closeness, reservation, secrecy.... The second: dissimulation, in the negative.... And the third, simulation in the affirmative.

Therefore, pretension and affectation are not unique to American culture. On the other hand, America, and impression management writ large, are smothered in images, illusion, false consciousness, unreality, inauthenticity and sham. Like jesting Pilate, you may ask, What is truth? and not stay for an answer. Television and Television City had no small part in the devastation of the truth.

I deny that the industry located on 300 acres in Television City in its 60 years of history has ever helped to house or feed a single American, although it has produced more millionaires and multimillionaires than all the oil since Titusville, Pennsylvania of 1859. Television is fame, which is fortune, the two being interconvertible. The Bible reproaches the one: Qui festinat ad divitias, non erit insons; and Bacon noted the flimsiness of the other: "For some in their actions do woo and affect reputation, which sort of men are commonly much talked of but inwardly little admired." So it is with the overpaid American celebrity, here today, gone tomorrow, once famous, now forgotten, like Lucille Ball, Bob Hope, Bing Crosby, Johnny Carson, and wealthy persons doting on images of themselves electronically bandied about society. "Fame is like a river, that beareth up things light and swollen and drowns things weighty and solid."

Finally, though never mentioning the gold bricks in the leisure class, American television turns out propaganda 24/7/365, which is the greater evil. After all, satis magnum alter alteri theatrum sumus (Epicurus).

John Fleming is author of the book Word Power, available through Amazon.com.