While the U.S. and Europe seem to prepare themselves to punish Russia for its "aggression" in the Crimea, which became a part of the Russian territory, the resort takes every effort to be well-prepared for the tourist season. Last year, as many as six million people spent their summer holidays in the Crimea. This year, the administration of the peninsula hopes to beat the previous record with the help of Russian tourists, the Minister of Tourism of the Republic, Elena Yurchenko said Friday. However, the Crimea has a serious competitor now - Sochi. The popularity of the Black Sea resort increased greatly after the Winter Olympic Games. 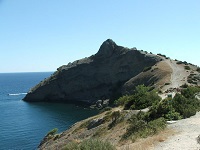 According to Yurchenko, the tourist season starts in the Crimea on May 1. To inspire potential guests to choose the Crimea as a destination for summer holidays, the minister urged not to believe that such a vacation could be dangerous.

"Do not believe the information that there are tanks in the Crimea tanks. We present a safe, high-quality tourist product," she said, speaking at the International Tourist Forum in Yekaterinburg.

According to the minister, the Crimea offers, "best mineral water on the Black Sea coast and therapeutic muds." In addition, on the peninsula there are 825 tourist bases, for any taste and wallet." "Prices range from 20 to 120 U.S. dollars - said Yurchenko referring to the cost of one day of stay at the resort.

"In the Crimea, there are 11,500 monuments of architecture and culture, including 2,500 underwater ones. There are countless waterfalls, six reserves, the coastal strip is 500 kilometers long," continued the minister. " We are waiting for the Russians. For the first time in many years, people will have a unique opportunity to spend their summer holidays in the Crimea, and they will not have to go to a foreign country for that," said Yurchenko.

The Russian government instructed Russian airlines to increase the number of flights to the Crimea and adjust ticket prices so that a return ticket would cost 7-8 thousand rubles ($200-250).

In mid-March, Yurchenko informed that air and ferry services were most convenient and safe ways to travel to the Crimean peninsula. The rail service is also available, although railway passengers would have to cross the Ukrainian border twice to reach the Crimea.

In 2013, Yurchenko said, the Crimea welcomed six million holiday-makers, of whom 65 percent were residents of Ukraine. The share of Russian tourists in these six million people was only about two million.

The Crimean authorities also hope that the Ukrainians will also continue to come to the peninsula for summer holidays. "If you come to the Crimea for holidays for 10, 20, 30, 40, 50 years, it is very difficult to stop doing it," said Yurchenko.

Deputies of the Russian State Duma have already said that they would spend their vacations in the Crimea.

In the next three years, the Crimea expects to increase the number of tourists to eight million people. Russia's federal agency for tourism, Rosturizm, received a task from the government to provide not less than three million tourists in the Crimea in the summer season of 2014. The goal is expected to be reached by reducing ticket prices at the expense of government subsidies. According to experts, the subsidies will cost the budget about one billion rubles.

The summer season 2014 in Sochi will open on May 17. The new season will begin with the opening of the Sochi Grand Regatta (Black Sea Tall Ships Regatta - 2014). The crews of 50 ships from 20 countries plan to participate in the regatta.

Prior to the Olympic Games in Sochi, new hotels were built in the city. According to experts, the city has turned from a regional summer resort to a multi-functional sports, cultural and tourist center of international class complete with contemporary social, transport, telecommunications and energy infrastructure.

In addition to the common forms of recreation in Sochi, such as beach and spa, the resort is ready to offer new types of entertainment. For example, young holiday-makers can go to the Olympic Park to enjoy the country's first theme park, which has already been dubbed as the Russian Disneyland. In the Sochi Park, every element is associated with Russian folklore. This is a beautiful park with unique attractions, featuring Europe's steepest roller coaster "Dragon Gorynych" and Russia's highest free fall attraction, "The Firebird."

The Sochi administration said that today the city has become the largest resort in Russia in terms of health and hotel facilities. The Winter Olympic Games brought the city international fame, and the city authorities expect that the number of tourists will increase dramatically this year, by 30 percent. Last year, the city welcomed about four million tourists, whereas this year, it is planned that the number will exceed five million.