In Europe, any type of economic crisis no obstacle for rising births

Recently, much has been said about the economic stagnation in Europe with an occasional dive of the countries of the region into a crisis. This topic has been discussed by the world media for a very long time. Rising unemployment, rallies, fights with the police, and rise of far-right activities provide a clear picture. Much less has been said about the fact that in recent years Europe saw an increasing birth rate. The latter fact does not seem logical considering the crisis in the region. 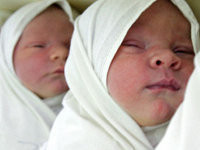 The European crisis has caused serious social unrest and political turmoil. In some countries, such as Greece and Portugal, a quarter of the adult population of the country is unemployed. However, data from international organizations, including the UN, supports the conclusion about the growth of the birth rate that began several years ago.

Recently, the UK National Statistics Service ONS stated that the birth rate has been at its highest level since 1972. Over the last ten years, the number of births has increased by 22 percent. The increasing birth rate has even led to an acute shortage of midwives for the first time in the history of post-war Britain.

The population is growing in France and even in Germany, the world leader in terms of the duration of depopulation. The country had been losing its indigenous population for nearly 30 years, an unprecedentedly lengthy period in world history. Now the birth rate is growing.

For the first time European politicians are talking about a baby-boom. Of course, the growth of birth rate is not yet adequate even for a simple self-reproduction of the population. An important demographic indicator, fertility rate (births per woman) in most European countries has increased in 2005-2010 by 12 to 20 percent. A stable long-term trend has been recorded that could not be prevented even by the economic problems in Europe.

Ultra- right-wing sentiments are growing all over Europe. It appears that the "old Europe" eventually expects to completely stop importing labor. This would have been impossible if it hadn't been for the new demographic growth.

We may be witnessing the rebirth of Europe. Europe is recovering from the disease of complete "economism" that has driven it into a corner and led to the extreme strain and depopulation. For centuries Europe had been the leader and the core of the global civilization. As a result of mutual struggle, the European countries have even divided the entire world. But in the 20th century European countries have committed a "collective suicide" in the two world wars. Due to large losses it has become more difficult to maintain the global dominance.

The countries of the region remained at the "top" only due to maximum economic mobilization of the citizens. All classes and ranks were involved in economic activities. Women were removed from the family and became full participants of the economic processes. The number of dependents, first of all, children, declined steadily, while the proportion of working population was continuously growing. As a result, European countries have made an extreme effort and used up all the reserves to the point that the very survival of the peoples of Europe was threatened. By 1975, the fertility rate in most European countries has fallen below the replacement level.

The extreme effort was rewarded with a high standard of living and high standard of consumption. It has also resulted in low birth rate, aging and depopulation. The 1990s were the "golden decade" for Europe. The high standard of living and a high level of social protection have become the standard. This is when the downhill trend has begun. Since early 21st century, the European economy has not experienced growth, fluctuating at a stagnation level, and sometimes had a clear downward trend. Developing countries were rapidly catching up with the Europeans.

Europeans are no longer willing to make an extreme effort. This is evidenced not only by the demographics, but also the economy. What is the reason behind the European economic "stagnation" unparalleled in duration, the alternation between recessions and slow growth? The Europeans today prefer to work increasingly less. On average, the Europeans work 30 percent less than the Americans. The Americans work 25 hours a week; French work 18 hours a week, while the average Italian works a little over 16 and a half hours. It is not surprising that Europe is in a more difficult economic situation than its main competitors, the United States and China.