The remarkable transformations of codpiece

A detail of clothing, known as codpiece, has its own very rich history. Surprising as it may seem, the first codpiece appeared on the armor of knights of the Middle Ages. It was only many years later, in the era of the Renaissance, when people began using it for "peaceful purposes." 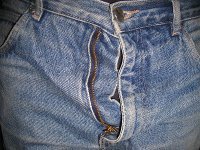 In Roman times, there was an emperor, whose Centurions would pull the togas of Roman men up in the streets to check that they were wearing pants. Back during those years, pants as a piece of clothing  were considered barbaric and indecent. Many years later, pants were worn by commoners and kings alike, although those pants would often be made in the form of two separate pant legs that were not sewn along the middle. The detail, referred to as 'codpiece' appeared just around that time. Many believe that this is simply a euphemism that in a decent way substitutes the word 'fly', although by and large this is not the case.

The word 'codpiece' originates from Middle English 'cod' that means 'scrotum.' It was a flap or a pouch that would be attached to the front of men's trousers to accentuate the genital area.

In our times, codpiece does not look anything like its medieval predecessor. It turned into a strip of fabric that is sewn into trousers - nothing remarkable at all. During the times of Henry VIII, a codpiece was a separate piece of clothing that would be clipped or attached to trousers with ribbons that would be arranged in a beautiful bow. Of course, it was simply impossible not to pay attention to this "bulging beauty."

By the way, Henry VIII loved codpieces, and his passion for them had no limits. He made them a bright and noticeable part of his costumes: his codpieces would be quilted, adorned with decorative slits and even precious stones. He wanted to demonstrate to the whole Europe that he had something to boast about. People would sarcastically say about him that "a codpiece appears in the room first, before the king himself." Of course, the codpiece was not only a decoration, but also a functional detail, that is, to cover the outstanding part of the body.

Interestingly, the codpiece was no more than an important part of knight's armor. It used to cover the place that was "excessive in almost every fight." Even in the so-called "Maximilian armor" it was made in the form of chain mail fabric pouch. Later, however, they started to make full-cast codpieces that were called 'tapul.' This item appeared on armor in the beginning of the sixteenth century and was called Schamkapsel in German or "lewd capsule."

Then the piece of armor transformed into a real cap of iron that would be attached to the metal abdominal part of the armor with rivets or multi-colored ribbons. It is believed that the fashion originated from the Swiss, who attempted to defend themselves in battles with German mercenaries, who insidiously aimed their spears in enemy's groin.

The metal codpiece appeared in about 1520, but disappeared around 1570. Interestingly, such codpieces would have a human face with nose and mustache coined on their tops.

Afterwards, the evolution of codpiece followed fashion rules. That's how it became an important accessory of Renaissance costumes and a subject of men's pride. The codpiece changed so much that it was difficult to see the historic character in it. It would be attached to men's trousers still, but it was only a decoration designed to meet the tastes of the owner. The codpiece would be adorned with embroidery, pearls, precious stones and decorative stitches. Some codpieces would be pointed up, resembling an erect penis.

Some used the codpiece as a pocket to keep small valuables and money. As the codpiece made ​​no secret of manhood, the Catholic Church was, of course, against it. Priests were horrified by the new fashion trend and sharply criticized it. Despite all exhortations, fashion reached the point when such pouches would be made for teenagers and even young children.

Fashion always changes, replacing excessive extravagance in dressing with conciseness - clothes were becoming more and more comfortable. The jingling of precious metals and stones gradually gave way for the sound of zippers or silent buttons. The codpiece today remains in the same place, providing nothing else but maximum comfort to men.

Having passed its fashionable and functional way through centuries, the codpiece ceased to be a separate piece of clothing and became rather a zone that it used to be attached to. If we talk about trousers or jeans for men, then the codpiece is a zipper or buttons, covered with a flap. In addition to jeans and trousers, men also wear shorts, boxers, briefs and even tights, and all these garments have "their own view" on the codpiece in accordance with the purpose of clothing, its features, cut and fabric.

Men's tights or leggings worn during the cold season sit tight on the body, so the codpiece is present there as a single vertical wedge which provides the anatomical support to the genitals. French company HOM is considered a pioneer in the field of underwear for men. The history of the company began in 1968 with the creation of underwear complete with a comfortable flexible codpiece. In 1997, the company patented the universal horizontal codpiece.

It would be interesting if the codpiece were back in vogue. One can only imagine how this accessory would look on a modern man. After all, women always check the genital part of men's trousers trying to guess what is hidden in them.