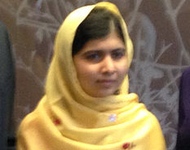 The Pakistani media are full with comments and articles reporting the praise that is meted out to Malala by the West and joining them in praising her for the alleged wonders and braveries she has done. Pakistan's media and Prime Minister are not sparing any chance to win their foreign master's goodwill. So much so that one gets pimples when just reading the name of the girl, because the great cause of educating the girls in Swat and the rest of Pakistan might be a problem since Pakistan unfortunately adopted the proxy war of US against the so-called terrorism that created the Taliban in Pakistan and the controversy around girl's education.

We should be clear that the West has its own agenda in praising her: Malala -whether she understands that or not- is singing the song of western ideas and values and thus promotes the agenda of the West. What does that mean? How is education or the promotion of education a promotion of Western values? The answer to this important question that we don't pose to ourselves often enough is that education is not equal to education. Education is not the transfer of knowledge or facts starting with learning how to read and write but the way how and why these facts are interpreted and put together to form the worldview of the student. Western-type education based on their worldview is materialistic and secular meaning devoid of the acceptance and appreciation of God in this world.

Western type of education promotes materialism based on a capitalist exploitative economic order, individualism, exceptionalism and egoism based on the destruction of traditional communities like family, baradari (clans), tribe and religious community; it is also based on the denial of any other source of truth than human mind only. In Western worldview man is the highest being, he is the lord of the world and able and entitled to do what he wants. This worldview and these ideas are taught and promoted by western learning and their textbooks - may be not straight forward but in a subtle way.

Malala says she wants girls' education. Fine, but keeping in mind the state of the educational system in Pakistan we need education - quality education - based on a world view compatible with our society-for boys as well. There is nothing wrong with the demand of girls' education as such and if the conservative mullahs and any section of Taliban have brought a bad name to Islam by denying education to girls then this has to be changed.  Muslims know that our Holy Book "Quran" told us 'read in the name of God' to the prophet and through him to all people that want to follow God's commandments - male and female. And education was the basis for the golden age of Islam when Europeans used to go to madrassahs for learning.

The problem is not so much girls or boys education as such but what type of education. The wrong type of education is damaging boys and men as much as girls and women by destroying our traditions blindly and denouncing God and the Truth. This should be the discussion in our media: what kind of education we need? Is this Western Enlightenment type of education that is sponsored by Western NGOs and Pakistani liberals good or not;  and are USAID advertised programmes suitable for our society or not? It is such a bad marketing trick to use a young girl who doesn't know much about the world and develop her into an instrument to sell western education in the tribal society.

She was first chosen to write weekly dairy for BBC Urdu service under the name of Gul Makai when she was not more than 10 years of age. The questions arises how she was chosen? Well, her father, himself owner of a school, has been that person interested in getting popularity for his school. The princely state of Swat that I had known from my school days was a place where the local ruler (Wali) made sure that educational institutions were much more and better developed than in many other places of Pakistan, where teachers used to take students for sight seeing tours, and we used to be amazed to see Primary Schools run by the government for girls and boys in every village and small children in uniform going and coming in remote touristic towns and villages, when many areas in settled areas of Pakistan had no school. It is on record that in a Cabinet meeting of then Punjab/West Pakistan the Education Minister Mr. Abdul Hameed Dasti had refused to allocate funds for education children on the pretext that "government cannot afford this luxury" because they wanted to protect and promote feudal system of politics in Pakistan

The senseless cheering of our so-called liberals of Malala and their insistence that 'the whole of Pakistan' was united in doing so is another lie. While surely people welcome Malala's recovery the kind of cult that is created around her has been rejected from day one even in her own home town when girls in Swat rejected their school being named after her. The more 'democratic' media like twitter and face book and numerous blogs are full with critical comments warning what damage can be done to the child by such undeserved praise.

More so, the daily bravery of those girls and their families who despite security issues or even grave danger make sure that their girls go to school is diminished by this Malalaitis.  Those who resist timid ideas and interpretations of Islam here and now on a daily basis are the real heroes of our society. Let's not get carried away with western propaganda started through media as a kind of psychological weapon of mass destruction. GOD Bless our beloved country and the People of Pakistan.