Russian children get gay love books from the West

Representatives of the LGBT community like to point out that remarkably creative people are abundant in their community. This is a correct statement, considering the level of creativity with which the idea of homosexuality is promoted and propagated among children in the Russian hinterland by some publishers. This is evidenced by a scandalous story that recently took place in Vladimir. 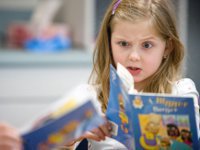 Another "book" scandal erupted in Vladimir, Russia. Local Ombudsman for Children Gennady Prokhorychev came across children's literature of a very specific nature in a local bookstore. Formally, the book was one of the many "encyclopedias" on the burning topic of sex and where kids come from.

There is a need in such literature, of course. However, the age of the audience must be regarded accordingly. After all, what can be told to 13 -15 year-olds may not be suitable for younger children.

The creators of the said "Encyclopedia" for the youngest clearly decided to make it generic and talk about "forbidden" topics openly. This is borderline pornography and public corruption of the younger generation.

However, this was not even the most peculiar feature of the book in question. The original edition was prepared in the U.S., and in Russia it was only translated and localized. For example, American women Mary and Ellen were transformed into "Aunt Masha" and "Aunt Lena." A respectable American book has to display the ubiquitous "tolerance."

The pages of the book have excerpts on issues "how people become gay," "how gays and lesbians make love" with corresponding pictures. Of course, the book is not saying that LGBT community are perverts who avoid the attention of psychiatrists only by virtue of the power of gay lobby, but is claiming that such relationships are normal. They say that the most important thing is feelings and there are different manifestations of them, and there is nothing to be ashamed of.

It is clear what consequences this "enlightenment" may cause. Normal heterosexual relationships are still not too common for children of puberty age. Friendship between boys and girls is relatively strictly controlled by the parents and school. However, friendship between children of the same sex is seen as something less concerning. Until recently, children unfamiliar with the gay topic would not think to consider their same sex friend as a potential partner. But if a thought of it was proposed, and coincided with the start of the hormone surge, the possibility of gay relationship among young teenagers instantly become much more accessible than conventional relationship, with all ensuing consequences.

The concern of the children's ombudsman in Vladimir is more than understandable. His actions can only be described as noble. Unable to urge sellers to remove the scandalous book from the shelves, or at least place it in a different, adult section, Gennady Prokhorychev bought the entire print, so the unsuspecting children would not be poisoned. After that the encyclopedia was sent for examination.

However, a number of observers in the media have expressed doubts whether such drastic actions by the defender of the children's rights will yield results as the legislation is imperfect. This sounds a bit strange. After all, the State Duma has recently passed a law banning homosexual propaganda among minors that evoked a strong reaction among Russian and foreign homosexual advocates, provides a fairly serious penalties for violators. In particular, a legal entity (the bookstore in this case) may be punished by a fine of 800,000 to one million rubles, as well as a suspension up to three months.

But it seems that such punishment does not scare anyone. Otherwise, dangerous books similar to the one described above would not be put up for sale, but would go to scraps directly from the warehouses of the publishing house that printed them. This is similar to ubiquitous "educational comics" of the American and European origin whose young characters are raving about the fact that "dad Petya and dad Vasily" live in peace and harmony and enjoy raising their adopted son.

There is another unpleasant factor. It appears that in the entire regional center there was not a single person besides the ombudsman who cares about spiritual poison being sold to children. It is understandable why police and prosecution cannot check all books being sold - they have other things to do. But what about education officials and child protecting agencies?

Equally strange is the passive attitude of the citizens. Judging by the results of various opinion polls, the law banning gay propaganda was supported by over 90 percent of the Russian population. Aid in its effectiveness does not require any particular heroism. All that citizens need to do is to report to the appropriate authorities propagandist literature sold in a particular bookstore. An old proverb seems to be true: "The cruelty of Russian laws is offset by the fact that they are not enforced." Even if these laws, as in the case described, are unequivocally fair and enjoy nearly unanimous support in the community.