Soldiers of the future coming to Russia

State-of-the-art military equipment "Ratnick" for army soldiers may be put into service next month in Russia. This was announced by the curator of the military-industrial complex, Russian Deputy Prime Minister Dmitry Rogozin. All leading armies of the world have been testing such systems, and the Russian Federation had to create its own set of gear for "the soldier of the future" as soon as possible. 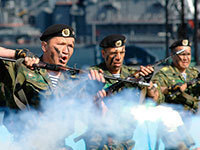 NATO countries implement programs to create similar outfits at the national level. These projects include FIST (Future Integrated Soldier Technology) in the UK, FÉLIN (Fantassin à Équipement et Liaisons Intégrées) in France, IdZ (Infanterist der Zukunft) in Germany, Future ForceWarrior in the U.S., Integrated Soldier System Project in Canada and a number of others. Australia has its own similar project, Land 125.

New combat outfits for the armies of the world are not just updated outfits with elements of protection. These are real navigation systems that allow improving the interaction of the soldiers inside the unit thanks to communication systems and mapping. They also provide direct communication between the field and a tactical and even operational (brigade, division) level of command.

That is, the lag in the development of individual equipment for soldiers in the long term means a lag in management and coordination of army units and the level of interaction between the branches of the military on the battlefield.

In turn, the implementation of this task requires not only the use of modern secure communication systems, but also a global geographical positioning system like GLONASS. The contemporary "queen of fields" needs satellite support for conducting effective combat actions.

The tests of "Ratnick", a modernized version of the previously developed "Barmitsa" system began at the 27th Motorized Rifle Brigade in the Moscow region. The tests in the airborne units have been conducted since early fall of 2012, and took place under the framework of "Kavkaz-2012" training. The modular kit has been praised by the army. Troopers asked to modify the mountable components that did not deal well with overloads during landing.

After visiting the arms factory in Kovrov, the first vice-premier Rogozin also said that "there are a few drawbacks in Small Arms that should be eliminated soon, after which the equipment will be put into service."

Rogozin assured that the equipment, navigation and weapons of "Ratnick" outperform similar systems of NATO countries.

When Anatoly Serdyukov served as the Minister of Defense, the Russian Federation planned to buy French outfit FÉLIN. It is likely that the development of the national outfit of the 21st century infantryman took into consideration the French developments and shortcomings.

To date, the outfit includes a number of subsystems. In particular, it is a protective kit "Permyachka" with bulletproof inserts protecting the soldier from shrapnel and other mechanical effects that could result in injury or death. It covers such body parts as the neck, hands, and shoulders.

The total weight of the light version of the outfit with ballistic body armor suit and a fifth-grade protection is under ten kilograms. The enhanced version uses the body armor of the sixth grade, with a special bulletproof helmet and overalls with shields. Its weight is about 20 pounds, which is on average five pounds less than some foreign models.

The communication subsystem used by "Ratnick" is "Strelets" system of Russian design. It ensures communication between individual soldiers and the command center both in the form of voice and special signal commands. "Strelets" can transfer photos and video from the scene of combat. The receiving device can be attached to firearm and the helmet. The video module allows firing without leaving the hideout. The navigation system is based on Russian software and hardware developments.

The life support system includes a number of elements: safety glasses, hearing protection headset, a set for protection of knee and elbow joints, an individual water filter, a set of independent sources of heat and a number of other useful field devices.

The main directions of further development of the system can be predicted. By 2015, the Defense Ministry planned to complete the development of combat gear "Boets-21" for the Army, Navy and Marine Corps.

Based on publicly available data, an important difference will be the introduction of a new set of elements that would increase muscular strength of soldiers and unload certain muscular systems. In the long term, this would increase the load of ammunition and fire weapons. According to recent reports, work is being conducted to reduce the weight of the kit from 36 to 22 pounds, which would bring the "Boets 21" closer to an enhanced version of "Ratnick."