Pythagoras and his theory of reincarnation

The name of Pythagoras is known to all from school, but many people associate this name with a theorem in geometry. Meanwhile, this ancient Greek philosopher, mathematician and mystic was the first man, who coined such terms as "philosopher" and "philosophy" (in our modern sense). He was also an advocate of the doctrine of reincarnation - the transmigration of souls. In some ways, he even shadowed forth ideas of communism. 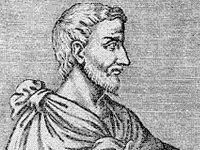 Pythagoras was born in Samos, a town located on the island of the same name in the Aegean Sea, which was one of the most prominent and well-known centers of the Hellenic world in the VI century BC.. Most authoritative encyclopedias do not state the birth year of Pythagoras. Pretty approximately, historians say that he was born in "about 570 BC". Herodotus, who lived after Pythagoras, and spent many years in Samos, pointed out that the mystic's father was Mnesarchus. The author of biographies of many ancient philosophers, Diogenes Laertius, added: "Pythagoras, the son of Mnesarchus, the rockmender." Ancient people used this word to refer to those who carved stones that were often used in signet rings.

Iamblichus, in contrast to other ancient authors, gave a different spelling of the name of Pythagoras' father - Mnemarh. Probably, it was a clerical error. Some sources mention his mother. There is nothing to prove that, but it is quite possible that the woman's name was Parfenida, and it was her husband that gave her a new name - Pifaida. The author of a recently published biography of Pythagoras, Igor Surikov, wrote: "That is extremely doubtful! The Greeks actually did not have the practice of renaming people, especially the grown-ups."

Mnesarchus gave that name to his wife after visiting the oracle of Apollo in Delphi to inquire about a voyage to Syria. The oracle said that the voyage would be successful and profitable. She also said that his wife was pregnant and that she would give birth to a child that would stand out among all others who ever lived before. The child will be beautiful, wise and it will bring good to people at all times. When his wife delivered the baby in Sidon, Phoenicia, he named his son Pythagoras, because Pythia foretold his birth. There is another interpretation of his name. "Aristippus of Cyrene in the book "About Physics" says that the child was named Pythagoras, because he was saying infallible truth, like Pythia did," said Diogenes Laertius.

Igor Surikov explains why such interpretation is unlikely, "Pythagoras is a common ancient Greek name, which appears for the most part without any connection with Apollo and Delphi. It should be noted that ancient Greek personal names typically have some meaning that one can transfer to other languages - "translate" that is, with a certain degree of accuracy. The first element of this name is most likely derived from the root 'pyth-', which means 'knowledge gained through questioning.' The second root, '-agor-,' is related to speech, most often public speech. Thus, the very name of "Pythagoras" can be roughly understood as "the person who speaks about what he learnt."

It is unlikely that the name of the philosopher's mother can be found in ancient sources. The ancient Greeks would rarely mention the names of women, especially from decent layers of society, in contrast to names of courtesans. Thucydides quoted Pericles, who lived a century after Pythagoras: "The woman deserves greatest respect, if she is least spoken about by men." It is possible that Pythagoras had brothers, but they did nothing to become famous, and we know nothing about them. One of them was named Tirrena, which means "Etruscan." Sources often point out that Mnesarchus was not a Greek, but an Etruscan man, so he named his son in honor of the people, to whom he allegedly belonged.

At the age of about 40 years, Pythagoras left Samos and moved to Italy. Maybe he went there because it was the land of his ancestors? The Etruscans had the reputation of mysterious people already in ancient times.

In antiquity, it was believed that it was Pythagoras, who started using the words "philosophy" (literally, "love of wisdom") and "philosopher" (literally: lover of wisdom). He taught that "only God, not man, could be wise." For it was premature to call philosophy "wisdom" and those who practice it - "wise men." A philosopher is someone who feels attracted to wisdom. According to another legend, Pythagoras' teachers were not only Middle Eastern priests and astrologers, but also famous mathematician of Miletus (Asia Minor), Thales. Pythagoras, of course, visited Miletus, but Thales died either before the birth of Pythagoras, or when he was a child.

There were numerous legends about Pythagoras' disciples of too. There is a story told by Herodotus about Zalmoxis, a disciple and servant of Pythagoras, who, once free, returned home and tricked "a few silly" fellow citizens of his. Having invited most illustrious citizens to dinner, he argued that "his guests and even their distant descendants would never die, but go to a shelter, where they could expect eternal life and bliss." He then took refuge of the Thracians for three years in the dungeon, and suddenly appeared before them during the fourth year of his seclusion, and the people "believed in his teachings."

The origins of the legend have the following explanation. Zalmoxis is a Thracian deity, whose cult had mystical and shamanic features. "And perhaps this is why he was wrongly associated with Pythagoras, - writes biographer Igor Surikov. - His views and practices contained elements of shamanistic beliefs."

Philosopher Porphyry wrote that Pythagoras had the son, Arimnest, a mentor of Democritus. "Others write that Theano, a woman from Crete, became the mother of Pythagoras' son Telavg and daughter Mia. Others mention his daughter Arignota, who even preserved Pythagorean writings.

As we know, Pythagoras left his native Samos and settled in Italy, which in ancient times was known as Vitalia. According to Timaeus, Pythagoras was the first one to say "Friends share everything" and "Friendship is equality." The "communist" principle of equality in the Pythagorean brotherhood was conducted fairly consistently. No Pythagorean was allowed to own private property. They even shared such personal items as utensils for eating. It seems that even Soviet communal apartments or dorms did not have such rules. The origins of the communist utopia can clearly be seen from Plato's "The Republic"

In turn, Plato was heavily influenced by Pythagorean teachings. For the Pythagoreans, the authority of their teachers was unquestioned. His statements, proven or not, were treated as ultimate truth. The Greeks loved to challenge everything (dispute begets truth), trying to find "for and against" arguments. However, when it came to the statements of Pythagoras, they fully accepted the words of their philosopher, similarly to how Christians accept the words of Christ and Muslims - the words of Muhammad. The Pythagoreans, according to Iamblichus, "ascribed Pythagoras to the rank of gods, as a good and humane demon."

"According to Pythagoras, the human soul can migrate from one human body to another, but also to the bodies of other creatures, such as animals or even plants. With each new incarnation, the soul loses the memory of the past. So every time we all live our lives as if we live for the first time.

The man known as Pythagoras died in 497 BC. in Metapontum, a town in southern Italy.