What are they like, kings and queens, princes and princesses? What do we know about them? Do we know much or only what we are allowed to know? Are they some celestial creatures whose lineage elevates them above all mortals? Or do we just think that their entire life is a never ending holiday, but in fact they have problems that we are not aware of? 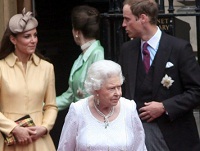 It is a common knowledge that the heir of the last Russian Emperor Nicholas II Prince Alexei suffered from hemophilia and was under constant supervision of doctors. However, his health issues do not seem that daunting when compared with the pain of a child of the last German emperor, Wilhelm II. The boy was born with a broken left arm that was shorter than his right arm by 15 cm and was subsequently forced to hide it. When taking a picture, or when appearing before the public, he was usually covering his left arm with the right one. In an attempt to fix the issue, doctors treated the young prince with daily cold shower of sea water, and tortured him with electric shocks. As if this were not enough, his arm was straightened and pulled by a specially designed machine resembling a medieval torture mechanism. His healthy right arm was tied to his body in the hope that he will have to use his left one. In addition, the boy had to wear a machine for head straightening (to fix a congenital neck injury) until his parents decided he should undergo a surgery.

All of this "treatment", of course, caused the young Wilhelm considerable pain, but helped him to develop a great willpower. However, disability did not prevent him from growing into a willful and wild boy. At the age of four, during the wedding of the Prince of Wales, he bit the Duke of Edinburgh on the leg, and later, when he became the emperor, he beat up his son. Bulgarian King Ferdinand got kicked by him in public, and a Russian marshal was hit with a baton on his back. He was an avid sailor, and never missed an opportunity to make a dangerous maneuverl. To shock the captains and crews of other ships, he got a monkey dressed in a sailor suit on his sailing yacht that was saluting everyone.

Today, servants of the crowned persons, like many years ago, have to be ready to fulfill any whim of their masters and predict all their desires. They must be loyal aids, self-sacrificing friends, be able to keep secrets and mysteries of the court.

Sometimes royal servants become known throughout the world. Chef Darren McGrady worked at the English court for 11 years and wrote the book "Eating Royally: Recipes and Remembrances from a Palace Kitchen."

An example of a terrible tragic absurdity is an old story with a curator of the art gallery of Charles I. The king asked him to bring a picture of Richard Gibson "The Good Shepherd." The curator could not find it, and, out of fear to admit it to the emperor, hung himself. The picture has not been stolen or destroyed, as the servant thought, but was placed elsewhere temporarily. Perhaps, this may seem funny, but these were the times.

Kings and queens, princes and princesses, like all of us, love doing something in their free time and their hobbies are quite similar to ours. For example, many of the past crowned persons often enjoyed painting and music. Some had talents of architects, and some loved solitaire.

At all times, queens and kings have been united by the love for travel, and many years later, nothing has changed as they have plenty of opportunities to see the world.

Love for sports is a separate topic. Members of royal families are even involved in the Olympics. It does not matter if they are successful because when the queen is watching and rooting for athletes alongside everyone else, it is very charming.

Horse riding and sailing are particularly popular. The current kings of Spain and Norway, Juan Carlos and Harald V, are excellent horsemen. Princesses of Denmark and Jordan, Sayn-Wittgenstein-Berleburg and Haya of Jordan, took part in the Olympic equestrian sport. Prince Albert II of Monaco is a fan of bobsleigh.

Many royals are members of various public organizations, and participate in the life of the country not only as monarchs. The King of Spain Juan Carlos never misses Formula 1 races that take place in his country, for which his people love him. Norwegian Harald V is always present at biathlon competitions held in Norway, and congratulates the winners. Prince William, Prince of Wales, personally represented England's bid to host the World Cup in 2018. Today royalty are closer to the people than even some hundred years ago, and for this they are loved in their countries.

In personal life the choice of a partner used to be dictated not by emotions but political calculation. Now everything has changed, and unequal marriages of royalty have long seized to be a surprise. They attend the same universities as ordinary people, serve in the army and fall in love with who they want.

For example, the Swedish Crown Princess Victoria married a simple fitness instructor and the entire country was cheering for her, and a national holiday was declared. Sultan of Brunei, a small, but very wealthy country in the northern part of the island of Borneo, married a flight attendant.

The wife of Dutch Prince Willem-Alexander is from Argentina, and the prince had to go against the rules, and get a marriage license from the Parliament.

Norwegian Crown Prince Haakon married a former waitress, who already had a child by another man and a dark past. But Norway's royal family was liberal, and the people of the country supported the newfound princess.

Everyone knows the story of Prince Charles and Princess Diana. Some, however, see it as a fairy tale, in which a simple girl's wish came true. The story ended tragically, without a happy ending.

Royalties are people just like us, with their problems, joys and disappointments. Their status will not save them from loneliness and does not promise recognition. Perhaps they would like to try to live like normal people, without being watched every minute, and maybe they would even like it. I turned to modern students with the question: "Would you like to be a royal person?" As expected, a little over 20 percent believe that the responsibility is too high, and the royalty do not belong to themselves. The remaining 70 percent would like to be a king or queen, explaining it with their childhood dreams and great potential of the crowned persons. But let us not forget that the grass is always greener on the other side of the fence.