In Russia's Volgograd, a criminal case was filed against an Egyptian, who urinated on the Eternal Flame and beat an accidental eyewitness on New Year's Eve, The Komsomolskaya Pravda newspaper wrote with reference to the press service of the Ministry of Internal Affairs. 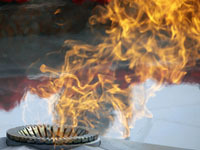 In the midst of New Year holidays, a drunk 29-year-old man was walking with friends in the center of Volgograd. He climbed up onto the pedestal and relieved himself in the Eternal Flame in the Valley of Heroes. A man was passing by at that moment, who made a remark to the foreign visitor. The Egyptian assaulted and beat the man. Other witnesses of the incident called the police, who arrested the malefactor.

"Having sobered up, he expressed remorse and explained that he was celebrating the New Year drinking absinthe with champagne and was thus not aware of what he was doing," officials said.

The Egyptian man was sentenced to ten days of administrative arrest, and was released on January 10th. Law-enforcement authorities of the Volgograd region have opened a criminal case against the Egyptian citizen on two counts - "Desecrating the deceased and burial places" and "Intentional infliction of bodily harm." Under these charges, the foreign citizen may face a fine of up to 40 thousand rubles ($1,300), mandatory corrective work, or up to three months in prison.

According to police, the foreign guest graduated from the Volgograd Medical University and left to his native country. Afterwards, he returned to Volgograd to improve his medical skills.

The Eternal Flame in Volgograd was founded February 1, 1963. The event was timed to coincide with the twentieth anniversary of the victory of the Soviet troops over Nazi invaders at Stalingrad.

News stories about hooligan actions aimed to desecrate the memory of the fallen heroes of the Great Patriotic War appear on a regular basis.

About 18 months ago, Russian commandoes put out the Eternal Flame at the monument to the defenders of the Fatherland by pouring beer into the fire. The men were celebrating the Day of Airborne Troops. Two young and pretty drunk men were resting on the lawn of the central square of the capital of the Republic of Karelia. The men got bored and decided to put out the burning flame, just for fun. They poured two cans of beer into the fire and then escaped, having spotted police officers. The men were arrested and brought to justice.

A similar incident occurred in April 2010, in the city of Ukhta. A drunk local man was arrested after he poured a bottle of wine into the Eternal Flame of the memorial to the fallen heroes of the Great Patriotic War.

In Ukraine, a group of young men demonstratively fried eggs on the Eternal Flame of the Kiev memorial twice. The Ukrainian nationalists committed their last prank in June 2011, at the Park of Glory, during official ceremonies with the participation of Ukrainian President Viktor Yanukovych and Chinese leader Hu Jintao.

Three members of art group The Egg fried three eggs in the Eternal Flame and uploaded the video of the act on the Internet. They dedicated their action to student Anna Sinkova, who had been arrested for frying eggs and sausages on the Eternal Fire.

In April 2010, drunken young people arranged a photo shoot on the Eternal Flame in the Kremlin of Nizhny Novgorod. Young men and women were laughing and warming their hands and feet by the fire, posing on the pedestal, jumping through the flames, and then posted the video on the net. All of them were subsequently arrested and later fined (40,000 rubles or $1,300) for "petty hooliganism."