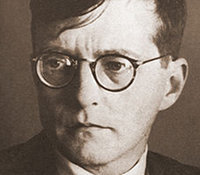 In the early 1970s, Russian (but then-Soviet) composer Dmitri Shostakovich was in New York enroute to a northwestern university to receive an award. Learning he was staying at the Hotel St.Moritz on Central Park South, I was determined to go there to meet this great composer. I had every confidence I'd be able, somehow, to arrange even a 5-minute personal greeting to him, even if only to shake his hand and tell him that my introduction to modern music was his own Fifth Symphony (still one of my favorite 20th-century works). Conjecture is fascinating but fruitless: unfortunately, I learned about his stay in New York only the day after he left.

We might wonder how we can "remember" someone we've never met. The difficulty disappears when we consider the man's work: he composed music which represents moments in one's personal "weather" that had a profound effect on the climate of many musical lives. It may seem paradoxical that I feel such a personal kinship with Shostakovich and his music without ever having had the opportunity to make his acquaintance -- but the kinship is there, and it's genuine: my experiences with Shostakovich through his music have been indirect but intense.

His contributions established him as the most significant 20th-century Russian composer (with the possible exception of Sergei Prokofiev), and brought Shostakovich early international renown. Invitations came from orchestras worldwide for him to play as soloist in his own piano works. His importance is of such magnitude that his career, like Aaron Copland's in America, became effectively an industry unto itself, even in foreign lands.

I was introduced to Shostakovich's music while still in school by two classmates: a pianist, Bruce Levy (now a psychiatrist), and by the concertmaster of the school orchestra, David Assael (a MIT graduate and engineer). As my friendship with both of them has continued for nearly five decades, so too has my bond with Shostakovich's music. Mr. Assael has been graced with the enviable circumstances of early retirement; Dr. Levy has the distinction of having met Maxim Shostakovich, the composer's son and now an important conductor; and I have the comfort of knowing that on one occasion in the 1960s I shook hands and spoke with Aram Khachaturian.

Success and recognition came early to Shostakovich. Born in 1906, in his youth he was encouraged by the great Alexander Glazounov. Interestingly coincidental is that both composers wrote their first symphonies at age 19. Shostakovich's piece was written for and performed at his graduation ceremonies. That this early symphony, among his later ones, has entered the repertoire of major orchestras worldwide bespeaks a degree of substance for the man and his work that is unusual in the musical world.

Russian culture is as rich as its language. Its music, too, is as accessible to the world as the language is difficult for those who haven't spoken it from childhood. Even Shostakovich's name has strength and stability, in keeping with the magnitude and significance of his music. The thick, horn-rimmed glasses he wore throughout his life became as much a distinctive visual hallmark of Shostakovich as did the cigar, pipe, cigarette and the glass of Scotch in the hands of Johannes Brahms, Arthur Honegger, Leonard Bernstein and Igor Stravinsky respectively.

When Gustav Mahler was composing his Eighth Symphony, he didn't have access to the singers' texts for the choral sections. He composed the music anyway, almost intuitively. It was providential that the texts ultimately fit his music almost perfectly. Some things happen instinctively: I seemed to learn as much about Shostakovich from the study of his music itself than by later reading of biographical information. The correlations were inexplicable but conspicuous. Aaron Copland, the dean of American composers, summed it up concisely when he said, "If it's in the music, it's in the man."

Shostakovich and Prokofiev were considered "Soviet" composers in their day but their music is Russian. When Prokofiev was expected to write music as instructed, he'd nod in agreement -- and then proceed to compose the kind of music he wished. Shostakovich was more practical: having fallen in and out of favor with the authorities, he had to be. According to recent tradition, Testimony, allegedly his personal memoir, was ultimately, and perhaps inevitably, smuggled out of what was then the Soviet Union and was published only in 1979, four years after the composer's death. The conjecture and debate about the memoir since its initial appearance continues even now.

In anticipation of his first visit to an English-speaking country, Shostakovich, already an adult, began studying English. His lesson notebooks reveal the diligence, earnestness and attention to detail that manifested itself in his own music.

During the 1950s a delegation of Russian composers, including Shostakovich, visited several music conservatories here in the USA. One of them was the Juilliard School in New York, where one of my teachers, Lawrence Widdoes, was studying at the time. The student body was told they may greet the Russian composers informally, as long as protocol was observed and that the illustrious visitors were treated with dignity and not molested. I asked my teacher if he had actually met Shostakovich. "I said 'Hello' to him in the hallway," my teacher told me. "He seemed surrounded by a green mist from the Russian cigarettes he was smoking."

At a Juilliard faculty meeting, Shostakovich said he was satisfied with his personal situation: he had a fine apartment in Moscow, a dacha near Leningrad, a quality automobile with his initials engraved on the door, etc., and that he had no need of the trappings of capitalism and the concern with money that can go with it.

In the mid-1960s I attended a gathering at the Greenwich Village home of music historian Leonard Altman. The talk soon turned to Shostakovich. Mr. Altman led some of us to another room where he opened a desk drawer, in which rested a small parcel but a large treasure: a packet of letters and notes in Russian on light blue paper, written to Mr. Altman, and all in Shostakovich's own letterhand. So near, and yet so far -- I remember experiencing at that moment what Verdi might have felt when he saw the manuscript of Beethoven's Eroica symphony in Vienna for the first time and silently removed his hat. As I've always regretted never having met Shostakovich, in retrospect I also regret not having had the presence of mind to apply the Nothing Ventured, Nothing Gained principle, and to ask Mr. Altman if I might have even one of the those notes only as a personal keepsake. It would never have left my possession: I would have been forever its custodian and I'd never have profited from its sale.

Several years later, at the now-defunct B.Altman's store in New York, I saw in their extensive autograph department a typewritten letter hand-signed by Shostakovich, mounted and framed with the envelope in which it had been sent. It was astronomically priced -- and this was while Shostakovich was still alive.

On the morning of August 9, 1975, my wife, Marie, told me Shostakovich had died. So far, and yet so near....  The world had lost the man who was debatably the century's most important symphonist. It was a full fifteen years before I again felt such a loss, on October 14, 1990 with the passing of Leonard Bernstein, whose performances of Shostakovich's music, especially of his Fifth Symphony, may be unmatched by any other American conductor.

Only a composer with an inborn sense of technique and confidence would use a fountain pen, as Shostakovich did, to sketch and compose much of his music. Like all great composers, he had a highly individualistic style and a distinctly recognizable Shostakovich sound. "There is a dramatic power in Shostakovich's music, in a 20th-century Beethoven manner." Thus wrote the late musicologist Nicolas Slonimsky, and his description is very fitting. Even the first six notes of Shostakovich's Tenth Symphony, for example, identifies him immediately. His music is as recognizable as is Mahler's. Indeed, there are parallels between the two composers' distinctive orchestrations.

Shostakovich lived in the era of Russian composers whose lives were directed by Soviet rule. It could be said that while it governed Prokofiev's life, it dominated Shostakovich's. He composed great music not because of governmental and political strictures, but in spite of them. That his work is now a staple of contemporary music is a testimony to his greatness as a musician. His place as a composer, generally, is as significant as that of Prokofiev, and as a symphonist, specifically, perhaps even more so. As Brahms had a towering musical intellect and was the dominant musical figure in late 19th-century Austria, Shostakovich as a 20th-century composer towered over most others, even in other countries, to the extent that the only things we may have had in common with him are human form and a link with music. Like Brahms in his own day, Shostakovich reached worldwide iconic status as a composer even during his own lifetime.

Fortunately, recordings were made of Shostakovich playing his own piano works, including his Preludes & Fugues, the Piano Quintet, his two piano concerti, and the Concertino for Two Pianos, which he recorded with his son Maxim as his partner pianist. Alas many of these are long out of print.

What's most obvious, by its nature, often escapes our attention: Shostakovich was as alive then as we are today. America has had its own great composers, but the world had Dmitri Shostakovich.

Jeffrey Dane is a music historian, researcher and author whose work appears in the USA and abroad in several languages. His most recent book, A Composer's Notes: Remembering Miklos Rozsa, was published by iUniverse for the composer's centenary. He has a marked tendency to develop an almost emotional attachment to the composers, living or not, whose music he studies. A turning-point of his musical life came when he first learned Shostakovich's music