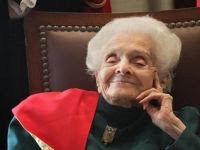 Rita Levi Montalcini died December 30, 2012 in her home in Rome at the age of 103 years, showing the world once again that the human mind, up to the last, can be more than  exceptionally superior to the difficulties experienced by the body which houses it.

It's easy to write a eulogy when a benevolent public personality dies,  especially if you have had a life devoid of scandals. But if you go to look more closely at the life of Rita Levi Montalcini, born in Turin April 22, 1909, you will see that her  life was much more than normal and free of scandal.

A medical researcher, she was many things at the same time. As scientist, she was a Nobel Prize recipient. A tireless organizer. An indefatigable worker. A first class intelligence: polished, precise, curious and full of fantasy. As feminist avant la lettre always opposed to obsolete social conventions, and she never believed in the division of genders, but only in the equality of their capacities. In her, the scientific effort was combined with humanity and respect for others following a natural vocation of her family, as she herself acknowledged in her memoirs.

Born and raised in a Sephardic Jewish family in which culture and love of  learning were categorical imperatives, she abandoned religion and embraced atheism. She devoted herself to Science, getting to the point of renouncing marriage for scientific research. She graduated in Medicine with honors in 1936, under the leadership of Giuseppe Levi, who will be always for her be a teacher and friend. Because of the racial laws promulgated by Mussolini, the Montalcinis were forced to flee abroad for refuge in Belgium, where she continued her postgraduate studies in psychiatry and neurology. Shortly before the invasion of Belgium by German troops, the young Rita returned to Italy, to Turin, where she organized a makeshift laboratory in clandestine conditions. She had to abandon her lab in 1943 because of the German roundups, often avoiding by a breath getting captured and sent to death camps. It's in her makeshift laboratory that Rita Levi Montalcini discovers first the phenomenon of the death of entire populations of cells: in 1973 it will be recognized as apoptosis, the programmed death of cells too damaged to continue living.

This is a prime example, powerful and symbolic, of the superiority of the scientific mind of Rita Levi Montalcini on the adverse contingencies of life.

Having survived the horrors of the Second World War, she went to the United States where she was invited to settle for a limited period of time by Viktor Hamburger, the scientist whose studies of physiology and neurology inspired Montalcini in her previous Italian period. It was the intent of both,  that the U.S. stay was to be short-lived, but instead it lasted for decades, with Montalcini frequently returning to Italy to stay in touch with family and national scientific research.

Between 1951 and 1952, her studies took her to understand that the growth and the differentiation of sensory and sympathetic  nerve cells is due to a specific protein: Nerve Growth Factor. The identification of this protein occurred thanks to her pupil and assistant, Stanley Cohen, a great biochemist the same as Montalcini, she had to say.

The discovery of the Nerve Growth Factor was the true and greatest achievement in Montalcini's life,  and had the effect of a revolution because until then the idea was rooted in that the nervous system was static, genetically programmed by genes to be immutable.

The Nobel Prize for Medicine was deservedly awarded to her in 1986.

Social and civic engagement of Rita Levi Montalcini was profound, as was the scientific one. She took part in various social campaigns like the one against anti-personnel mines. She established a foundation dedicated to the memory of her father, whom she loved much. She was one of the co-founders of the Italian section of Green Cross International.  She chaired the Institute of the Italian Encyclopedia and was an ambassador for FAO.

In 2001, she was named senator for life by the Italian president of the Republic, Carlo Azeglio Ciampi, in recognition of her scientific and social efforts. By virtue of this political appointment,  granted for high achievements, Ms. Montalcini could sit in the Senate and participate in parliamentary debates without being elected in an electoral college.

In the end, death inevitably took this distinguished Italian lady who has never stopped loving her country.

We want to finish this short and imperfect tribute with an anecdote: at the last general election a few years ago, Rita Levi Montalcini found herself in line at the polling station to express her preference to vote. She asked to jump somewhere ahead in the line because she had already seen 100 years, her eyesight and hearing were a bit weak, her legs a bit wobbly. Although not recognized as a distinguished personality, however, she was scolded by some of the other people in the line that accused her of skipping her turn. The chairman offered her a chair, so she could wait at least sitting, but she refused, standing stubborn until her turn.

Here, in this way, we also want to remember this beautiful girl of the past who loved Italy so much to not disown it ever. We want to remember her bright intelligence, her determination, her fortitude, her generous sympathy.

Unlike other people, Rita Levi Montalcini was a complete human being.