Under a torrid 40 degrees Celsius, the Brazilian city of Rio de Janeiro woke up on December 25 under a white blanket. Only it was not snow - it was a mysterious white soot-like dust which entered people's apartments and caused allergies. The authorities still do not know what caused it... could there be a serious health risk? 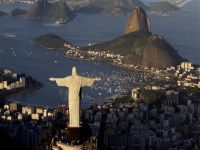 The official data available can be summarized by a white soot-like dust which descended on several areas of the city of Rio de Janeiro early on the morning of Christmas Day. Eye witnesses described the phenomenon as being like snowflakes falling. The dust settled mainly in the southern areas of the city such as Lagoa, Copacabana, Ipanema, Botafogo, Laranjeiras, Largo do Machado and Glória, in the Centre, Tijuca (North) and Recreio (West).

Eye witnesses declare that it is a fine white powder which entered apartments and in some cases caused allergies. The Brazilian environmental authorities are still investigating the causes of the event.

Some commentators postulate that the microparticles could have come from the volcanic eruption in Chile.

In 2010, the States of Rio de Janeiro and São Paulo set up stations to monitor a similar phenomenon of white microparticles which invaded the cities and which at the time considered as a serious health risk. At the time the blame was placed on the incomplete burning process of fossil fuels used by vehicles and which were, in 2010, declared to be responsible for 77% of the air pollution in the Metropolitan Area of Rio de Janeiro.

The nature of this substance was of particular concern to the authorities because it was four times smaller (at 0.0025 mm.) than the size of microparticles which were considered dangerous and for this reason the particles penetrate very deeply into the human respiratory system. Such particles have been linked by some experts also to heart attacks and cancer.

If the microparticles which spread out over Rio de Janeiro on Christmas Day are of the same origin, then a public health alert may be in order.