Russia tries to avoid its own Newtown

Recent mass murders in Russia and in the world, eloquently drive at the need to introduce criminal punishment for illicit arms trafficking. Everyone, who wants to get official permission, should undergo psychiatric expertise. Specialist, who signs the certificate, shall be responsible for their decisions. 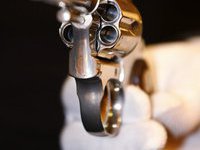 The elementary school in a small American town of Newtown has become another point on the map, where mass killings of people took place. The list of insane killers with Breivik from Norway and Vinogradov from Russia has been added with Adam Lanza, who shot 26 people, 20 of them - children aged from five to seven.

More than 120,000 Americans have signed the petition demanding the authorities should limit arms sales. Russia also looks for ways to protect the society from armed psychopaths.

On the one hand, it appears that there is no free sale of pistols and machine guns in Russia. But all those who want to get a gun can find ways to do it easily. The main reason for such accessibility is the absence of severe punishment for illegal sales of weapons.

The chairman of the National Law Society, Alexander Khaminsky, is certain that it is time Russia should establish law and order in the field.

"During the 1990s, new Russian laws were written as a blueprint from Western laws. This included the facilitation of purchasing so-called civilian weapons. As a result, many people became owners of rifles and pistols solely for self-assertion," the expert said.

According to Khaminsky, there is a paradoxical situation in the Russian criminal law. The majority of crimes committed with firearms are classified as serious or very serious. Arms trafficking - acquisition, possession, carrying and distribution - is categorized as crimes of moderate severity entailing minimal punishment.

The lawyer is convinced that without adequate punishment for illegal use of weapons, they will continue to be publicly available to potential killers.

There is another important aspect to the story - the responsibility of doctors, who issue certificates for the right to own weapons. It goes about physicians who examine the state of human psyche. Nowadays, getting such a certificate is not difficult at all: 10-15 thousand rubles ($300-500) - and it is in your pocket.

Deputies already work on the problem. In particular, Just Russia deputy Mikhail Serdyuk prepares a law providing a punishment for up to two years in prison for fake medical certificates. Chief physician of the Scientific Diagnostic Center of Clinical Psychiatry, Nadezhda Solovyova also believes that it is necessary to toughen responsibility of doctors.

"Today, getting a permit for a driver's license and possession of weapons is quite simple. You come to the psycho-neurological clinic, and they check, whether you are in the database. Then you go to a psychiatrist, who looks at you, asks if you have any complaints and a few minutes later puts the signature."

The growth of crimes related to the possession of weapons confirms that there is a need to complicate the process of obtaining medical documents. "The psychiatrists, who issue certificates, must take responsibility for the consequences of their decisions," Nadezhda Solovyova believes.

The general public and lawmakers will have to find ways to protect people against "peaceful" citizens, who wake up one day with a desire to shoot others.