Eternal life without sickness and old age - everyone dreams about it. But this kind of science fiction may eventually become real and it gets real already today. Science moves forward, and the ghostly idea of cryonics has already become a part of modern life. Leading expert of the Institute of Biology of Aging,  biophysicist Igor Artyukhov told PRAVDA.Ru chief editor Inna Novikova about his struggle with yet the inevitable. 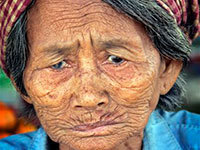 "After 20 years - probably unlikely. But in 40 years, I would not rule that out. If people do not learn how to do it in 100 years, I would be surprised to know about it. This can be possible if the current rate of technological progress remains the way it is today - very high that is."

"We now have a company, KrioRus, that is responsible for this kind of future -cryopreservation. And you are related to this company."

"Yes. I am actually the director of research at the company. Well, we do not do much science there, to be honest, simply because there are no financial resources for this. The firm is on the edge of survival, the services are cheap as possible."

"How cheap are they?"

"That is, you enter into a contract with clients."

"Yes, but people mostly call us and say: 'You know, our grandfather has died, we would like to freeze him."

"How many frozen bodies or body parts do you have?"

"And you have there a storage facility, where certain conditions are crated?"

"Yes, there's liquid nitrogen, the temperature is minus 196 degrees. Maintaining such a low temperature is not that easy technically, so, in fact, it is worth the money."

"How can you explain this technology from a scientific point of view?"

"Experience shows that many animals and insects can be frozen and unfrozen without causing much harm to them. For example, the Siberian salamander lives in Yakutia, where winter temperatures often go below 40 degrees Centigrade. The animal crawls into a crack in permafrost and can stay there for a very long time."

"A registered incidence is 90 years." Blood, sperm, stem cells can also be stored in a frozen state."

"Let us now imagine that your client was unfrozen and cured in the future, but it turns out that this person does not know anything about this new life and he or she can not adapt to it. So what to do?"

"Of course, this is a problem. But when a person comes from a remote village to a big city, it takes them time to adapt too. One can develop a special program for their adaptation, but I think that the problem of adaptation will be one of the most simple ones in comparison with other challenges that will arise during the process of unfreezing the human body."

"You could write books on science fiction."

"This is not really science fiction, this is practice, but it has not been proven yet, whether it is going to work or not. A person can choose. For me, for example, it would be awfully interesting to see the future."

"Would you be ready for such an experiment about yourself?"

"Of course, why else would I do all this?"

"So you do it all for yourself?"

"Naturally. After all, KrioRus is a non-profit organization. We take money to ensure minimal financial stability. The company was created for ourselves and our loved ones."

"Do you have followers? Who is going to continue this?"

"You know, this set of ideas is very popular among young people. Although it would seem that it is too early for them to think about death, immortality, and similar matters. It turns out that people do not think about such things at a certain age. I, for instance, began to think on the subject when I was a child."

"What about the human soul? After death, the soul leaves the body on the 40th day."

"No, it's pagan ideas. In the 19th century, there was a great Russian philosopher Fyodorov, whose ideas largely predetermined what we are doing at the company. He used the term "soul", but he never said "immortal soul." So the Christians, at least some of them, separate the notions of soul and immortality. A book, which exists in one single copy, is mortal. If you do not have copies, and the book was burned, then it no longer exists. Personality and soul - you can call it whatever you like, but it is just as exterminable. The technology of the future, as Fyodorov hoped, can help restore the content of this book - to restore the soul."

"What is the purpose? What are we here for? To continue life, to raise children ..."

"Everything happens not for something, but because of something, for some reason. There was an icicle on the roof, and then it fell down. It did not fall down for something, even if it killed someone. It fell down from the roof because it thawed. We had no purpose when we were born."

"However, it is generally believed that one has to do something, have children, raise them, leave something behind."

"Well, it's a tradition ... If a man wrote a book, it does not mean that he was born for this. Parents may have given birth to us with a purpose, and it may be different from ours. The majority of people give birth to children mindlessly."

"How many years do you feel for?"

"I feel I am a continuous entity."

"If you live forever, then you stop rushing somewhere. You can always take time because it would seem that you will always have time for everything, that you can do everything later."

"If you know you'll die anyway, you do not rush either. And most of us, by the way, live by this principle. Few people can write a book, trying to finish it before the end of life. Most of us just live. You can not bring the meaning of life from the outside. People set all goals themselves. If life is long, they will be able to set a lot of goals and reach them. If life is short, people just die. Imagine how much Galois could do, who at age 20 proved an important mathematical theorem. Let us understand one simple thing - there is nothing good either about aging or death. This is something that we have imposed on us by nature, events, our lifestyle. We do not know any laws of nature that could make aging and death inevitable. If we can cope with aging, then we should do it. Many say that it is not like this, they say that it is contrary to the laws of nature. This is incorrect. They mention the second law of thermodynamics, which has nothing to do with aging. Moreover, it turns out that there are ageless creatures in the world. The naked mole rat revealed no signs of aging. This is a tiny animal, the size of a mouse. Maybe we will be able to make man ageless too."

"Old age - this is still weakness. Imagine how young people will suffer, when they are forced to endure endless moods."

"Depression is one of the manifestations of senile debility, when a person wants to die soon. It happens that people commit suicide at this age. But this is a manifestation of aging, and we want to fight with it. If we can push aging away, elderly people would stay longer in sober mind, they would feel useful to society."

"How can we make old age not feeble and horrible, but joyful and fulfilling?"

"Well, you first need to make it come as late as possible. In the words of biologist Ashley Montague, "I want to die young as late as possible." From my point of view, if it were possible not to die, it would be better to do without it. If this is impossible, then we must find a way to postpone death. My mission is to extend the active period of life in perpetuity."

"Do you think that these problems are real?"

"I do not see any point in limiting this."