Boris Strugatsky, who died on Monday night in the hematology department of the Federal Center of Heart, Blood and Endocrinology named after Almazov in St. Petersburg, would not let his friends and family talk to him about the disease, novelist Nina Katerli, a close friend of the famous writer said. 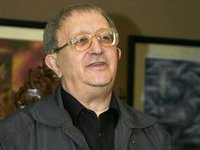 The writer was hospitalized a week and a half ago, for health checks. "Boris died at seven o'clock of severe pneumonia," said Katerli.

Nina Katerli noted that during the last months of his life, Strugatsky would not allow his friends to talk about his illness. If someone asked him about his health, he would only say that he was fine.

Doctors did their best to help Strugatsky, but they failed to save the writer. A close friend of Boris Strugatsky, deputy Boris Vishnevsky, told Life News that at the time when the news of the death was made public, everyone thought that the worst things had passed.

"The therapy was successful, and Boris was going to be discharged. His condition worsened all of a sudden, doctors diagnosed pneumonia. A few days later he died," Vishnevsky said.

Boris Vishnevsky told the Komsomolskaya Pravda newspaper said that he was one of the few people who could come to visit the writer, when he was feeling better. "He did not want everyone to see that he was not good," he added. According to Vishnevsky, two weeks ago, he was talking to Strugatsky on the phone.

According to Nina Katerli, the question of where Boris Strugatsky is going to be buried has not been discussed yet. She reminded that the ashes of Boris Strugatsky's brother - Arcady -  who died in 1991, were scattered from a helicopter in the Moscow region, according to his will.

Mass media responded to the death of Boris Strugatsky with numerous obituaries. Journalists note the prophetic gift of Strugatsky brothers. A phrase from their story "The Ugly Swans" is especially indicative from this point of view. The writers said that it was important to draw conclusions from such forecasts and work to eliminate possible negative consequences: "The future is thoroughly neutralized present."

Not that long ago, answering questions from KP readers, Boris Strugatsky described the future of Russia.

"Apparently, we will witness one of the two variants. The ruling elite will come to realize that the only way for Russia to go is democracy, free economy and Europe. In this case, Russia will see another "perestroika" and the wind of change. The situation may also continue to develop the way it is developing now. If so, then the country will stagnate and turn into a third world state with nuclear missiles at the ready. The country may eventually collapse, the "Syrian scenario" may repeat, including the deployment of an international police force. Russia will have to make the choice in the next 20 years, because there is the energy crisis looming with all its charms," the writer said.

The Kommersant newspaper wrote in connection with the death of Boris Strugatsky that the great era of Strugatsky brothers ended together with Soviet stagnation. Afterwards, Boris Strugatsky wrote two novels under pseudonym S. Vititsky. He was supporting young science fiction writers.

Boris Strugatsky was born on April 15, 1933 in Leningrad into a family of a museum employee and a schoolteacher. During the Siege of Leningrad, he stayed in the city with his family until 1943.

After school, Boris Strugatsky entered the Mathematics and Mechanics Department of the Leningrad State University and then became a student of post-graduate school of the Pulkovo Observatory, where he subsequently worked.

In collaboration with his brother, Arkady Strugatsky, Boris wrote iconic works of Soviet fiction: "The Land of Crimson Clouds", "Hard to Be a God", "Monday Begins on Saturday", "The Final Circle of Paradise", "The Ugly Swans", "Prisoners of Power", "Roadside Picnic," "Definitely Maybe ", "Beetle in the Anthill." After the death of Arkady Strugatsky, Boris wrote two novels under the pseudonym S.Vititsky.

Strugatsky brothers won numerous Russian and international awards. Boris Strugatsky is the founder of his own prize "Bronze Snail."