A dog tracks his owner down...to hospital, crossing a highway, a natural park and a stream. Remember the film Hachiko? The Japanese dog which went to the local railway station to wait for his master after he died of a heart attack, day after day week after week, year after year...? We track down several stories of this singular and unique loyalty... 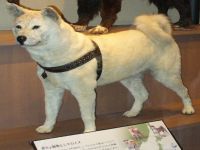 The recent story of Zander tracking down his master who was hospitalised with a skin condition in New York is yet another in a long list of tales when man's best friend can pine no longer and goes to see for himself what has happened. In this case, Zander's master, John Dolan, from Bay Shore, Long Island, New York, was hospitalised around four kilometres away from his home. Zander, a seven-year-old white Samoyed-husky mix, twoce made the journey to the hospital, crossing a highway, a nature reserve and a stream and waited patiently outside, where his master was interned.

Today both are reunited and living at home. Happily.

The legendary Hachiko became a national and international icon, the star of dog shows when he was alive and the star of films (1987, remake in 2009) many years after his death (1934) after he spent almost ten years waiting every single day for his deceased master at the railway station in Shibuya, Japan.

Then there was the dog Rin Tin which received a medal for ten years' attendance without missing at Sunday School - more assiduous than the children he went with, who did not receive one; Sam, who made an 840-mile journey from Colorado to California to be reunited with his master; Rover, who hiked for four months to find his family.

And it is not only in the United States of America than dogs have made history, or stories. Russian literature is full of them:  The Russian novelist, short story writer, and playwright

Ivan Turgenev (1818-1883) wrote about the exploits of Mumu and the mute serf who saved him, Gerasim;  short story writer, playwright, and physician Anton Chekhov (1860-1904) made Kashtanka famous for her loyalty to her abusive master, preferring to be with him than the circus trainer who loved her; then there is The Faithful Trésor, by Mikhail Yevgrafovich Saltykov-Shchedrin (1826-1889).

A touching story comes from Portugal, some years ago when a family from Lisbon went on holiday in Minho, four hundred kilometres to the north. On the first day of the holiday the dog became lost and the desperate family spent the rest of the holiday looking for it, in vain. After the month-long period had elapsed, it was time to return to work and so they made the journey back home, to Lisbon, where they found their dog patiently waiting for them outside the house.

If animals can show such singular loyalty and devotion and love to human beings, why can't we and why do we have to spend time, money and energy inventing devices to kill each other?