On the website of the world's largest US-based online retailer Amazon.com, one can find a toy for children (from 8 years) - a jigsaw puzzle. The puzzle consists of 252 pieces. With this toy, children are encouraged to create a picture that depicts an image of Dachau crematorium ovens. European officials immediately condemned the game, which was made for sale in the United States. 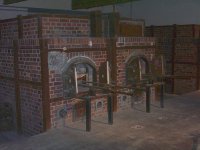 Former vice president of the German Bundestag, a CSU deputy, Gerda Hasselfeldt, urged Amazon to remove the game, which contained a photo of the Nazi concentration camp crematorium at Dachau. German magazine Spiegel quoted a letter, which the official wrote to the CEO of the online store, Jeff Bezos: "For the survivors of the concentration camp and for the relatives of the victims, this is a blow in the face. The memorial of Dachau concentration camp is a reminder of the sufferings of countless people. Selling such toys can not be in the interest of Amazon."

We do not know yet, whether anyone at the American retailer responded to the letter. According to Spiegel, the motive for the production of the jigsaw was the routine work to produce puzzles with pictures of a photographer who specializes in taking pictures of places of interest around the world. Amazon offers over 80,000 kinds of jigsaw puzzles with his photo illustrations.

Commenting the article about the reaction of 62-year-old Frau Hasselfeldt to the infamous puzzle, a German resident wrote: "I ask myself, why Frau Hasselfeldt does not take any efforts to finally raze the graves of war criminals at Spöttinger cemetery in Landsberg first."

The Prison in Landsberg is famous not only because it was the prison where Adolf Hitler served his sentence and where he wrote "Mein Kampf." The prison is also known for its cemetery, where many Nazi executioners are buried. Given that the prison is subordinate to the authorities of Bavaria, to which deputy Gerda Hasselfeldt belongs, it appears that it is her duty to get rid of the cemetery. Why sending a letter across the ocean, when you have war criminals buried right in front of you?

How can you remind US kids of the horrors of the Third Reich? Most of them have never visited the memorial center in Dachau, if they have ever traveled to Europe at all. They will grow as office plankton brought up on the notions of political correctness. Why can they publish colorful albums with photos of concentration camps, but why can't they put those pictures on other things? The child who assembles this puzzle may not even wonder what the picture shows.

When people say that children should not be playing with "this awful place" out of respect to the memory of the victims, who were tortured and killed there, let's ask about the respect for the feelings of the living. The current political situation in the West makes its own rules. Following double standards, the West turn a blind eye on the marches of SS legionnaires or the relocation of monuments to Soviet soldiers in the Baltics. They keep on telling stories about the "atrocities" committed by Red Army soldiers, about mass rapes and other crimes committed against the people of the "occupied" countries during the Second World War. They compare Stalin only with his opponent - Hitler, and never with the leaders of the allies of the USSR, even though the unprincipled US president or Mr. Churchill could be friends with any dictator or monster in human form.

A clear and consistent position in relation to the heroes and victims of the past war could correct the situation.