After the "Arab Spring" the life in a number of countries in the Middle East became dramatically more extreme. In Iraq, Egypt and Syria, life for Christians became very difficult. But there is a Middle Eastern country whose main religion is not Islam. How do Christians live in Israel? Was Prime Minister Netanyahu right when he said that Christians freely profess their faith there? 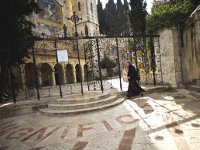 Speaking recently in Jerusalem, Benjamin Netanyahu said, "If in many countries, such as Syria, Christians live in a state of siege, here, in Israel, they are free to practice their faith." The Israeli prime minister urged Christians to rally around Israel and protect the Christian civilization from total Islamization posed by the "Arab Spring."

Netanyahu's words were heard at the congress of the movement "Christians for Israel" whose members call themselves Christian Zionists. Long before the Christian Zionist Congress, Russian experts voiced the same opinion that Netanyahu expressed. In their view, in the near future, Israel will be the last refuge of Christianity in the Middle East, as other Christian areas of the region will be swept away by the bloody "Arab Spring" and the growth of Islamic fundamentalist tendencies. In a raging ocean of armed jihad and war "a la Somalia," which threatens the Middle East in the near future, Israel actually looks like Noah's ark for Christians. But is this true?

Israeli experts interviewed by a reporter of GTimes said that Netanyahu's words of the free exercise of Christianity in Israel were, to say the least, wishful thinking. "Netanyahu is a pathological liar. There is discrimination against Christians in all areas. Recently one man, accused of baptizing his children, was deported from Israel. "Especially hard is the life of Jewish Christians," said an Israeli human rights activist Maria Pesikova. "According to the Israeli law, a converted Jew has no right to repatriation, so Christians have to deny their faith when entering the country, in other words, to renounce Christ. Children of Jewish Christians are bullied in schools. Moreover, Christian parents of Jews are not allowed to teach their children faith. If Social Services find out that a Jewish child is a Christian who fasts, prays and goes to the temple with her parents, the authorities have the right to take away custody of the child from the parents, as it is considered child abuse."

Israeli writer Israel Shamir, who came from the Soviet Union, is a Jew who converted to Orthodoxy. "Israel does not carefully and persistently chase Palestinian Christians to replace them with Christians from Iraq or Syria," he said in an interview with GTimes. "In the homeland of Jesus Christianity is persecuted: churches are set on fire, there are laws against missionaries. In Knesset the Gospel was publicly destroyed."

The last reference is to the notorious case on July 17, when a deputy Michael Ben-Ari publicly tore the New Testament and threw it in the trash. The journalists who were in the audience remember the words of Ben-Ari: "This book served and continues to serve as the basis for the persecution and murder of Jews. Its place is in the trash."

Desecration and destruction of Christian churches began in the early days of Israel. From 1947 to 1967, most of the local Christian churches and monasteries have been taken from the faithful and turned into military camps, depots, and artillery batteries. It got to the point that some Israeli soldiers would relieve themselves at a Christian cemetery.

In 1948, during the Nakba, military blew up a Christian church in the Arab village of Ikret and destroyed nearly all of its residents. Ikret was fully populated by Christian Arabs. They did not want to leave their homes and the graves of their ancestors, and met the Israelis with arms.

During the Six-Day War IDF soldiers again desecrated the Holy Sepulcher and fired guns at a famous Church of the Nativity in Bethlehem. In Ramallah, the current capital of the Palestinian Authority (PA), the Israeli shelled a women's Episcopal School, where many Arab girls studied. Many of them drew their last breath in the rubble of the destroyed school.

After the Six Day War, the existence of Christians in Israel became reminiscent of a life on a volcano. Brief periods of peace were alternated by the harassment by radical Zionists. Thugs raped nuns, beat priests, threw stones at Christian procession and hand grenades through the windows of churches.

During the exacerbation of Israeli relations with the Soviet Union, the Russian Orthodox Mission in Jerusalem was subject to attacks. It was considered the KGB residency in Israel. Head of the Mission, Archimandrite Tikhon (Zaitsev) in 2008, recalled that seeing a priest, rabbis would spit at his feet. "Spitting was not that bad, it happened that stones were thrown at us," he said. By law, rabbis were required to pay fines for these misdemeanors, but all attempts to bring them to justice would end in failure. Bullies and tyrants were either helped by the police, or bailed by the Knesset members.

However, bullying and rape were nothing compared to the tragedy of Palestinian Christianity in the late 1990's - early 2000s. After 1997, Israel gave the PA a number of controversial areas, and the number of Christians there showed a sharp decline. Muslim fanatics of Fatah and the "Islamic Jihad" considered Christians the "fifth column" of Israel, organized real genocide for their brothers in faith. The PA appealed to Tel Aviv during the persecution of Christians, but Tel Aviv was not touched. Benjamin Netanyahu was Israeli Prime Minister at the time.

For the current Israeli leader, the issue of the Christian denomination is directly linked to his personal situation as a politician. Christians for him are chess pieces in a series of multi-series combinations. Netanyahu admitted that his family never had anything against Christians. Moreover, speaking last Sunday in Jerusalem, Netanyahu vowed to defend the Christian civilization.

Meanwhile, the situation of Christians in Israel is still very controversial. According to a Catholic priest at a parish of Haifa, "for the Israeli, a Christian is a person who should be avoided." A Christian is pariah and a permanent "irritant" for the orthodox Jews, who, seeing a cross on his neck, can easily spit at him or his feet, expressing their disgust with the "impure." This applies to all individuals in Israel, Christians, Arabs, Armenians, the Greeks, and the Russian. The most difficult situation, of course, is for the baptized Jews who are strangers in the land of their ancestors."