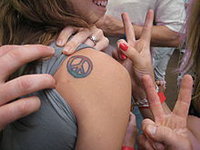 Bishop Fulton J. Sheen (1895-1979), one of the most remarkable Americans of the 20th century once remarked: "Unless souls are saved, nothing is saved; there can be no world peace unless there is soul peace."

One of the most common words spoken in the world today is the word "peace". Yet everywhere we look we are surrounded not by the tranquility of order but by violence and terror. Why? Why do we all stress peace yet find it so illusive?

Recently, ex-Beatle Ringo Starr, announced to the world that he couldn't be bothered signing any more autographs for his fans. At the same time he wished his fans "peace and love". As many people know The Beatles were part of a 60's counterculture movement that promoted a selfish kind of individualism under the guise of peace and love. "Turn on, tune in, drop out" was the phrase coined and popularized by LSD proponent Dr. Timothy Leary to express this desire for self-gratification. This anthem to hedonism was meant as a therapeutic answer to life. It promised one the power to find the divinity within through sex, drugs and through the detachment from commitments and authority. Instead it lead to a lowering of moral standards, anarchy, rebellion and much unhappiness.

In the 90's the computer provided the means for many to further internalize and escape reality. Leary went on to call the PC "the LSD of the 1990's". Using his new catch phrase "turn on, boot up, jack in" he suggested we all engage the cyberdelic counterculture.

The vast majority of people today think of peace as something that comes inherently with the accumulation of wealth or fame. They think that the more material things they have and the more they are liked by others the happier they will be. But sooner or later most realize that material gain and empty friendships become boring and even disgusting.

This thirst to appease our sensual appetites has led to the proliferation of the pragmatist who, while striving to maintain and at the same time build upon man's hedonistic tendencies, sees world peace as a kind of far off illusion or distant utopia that can be achieved solely through man's own ability to weigh and determine the consequences of his actions in every circumstance. For the pragmatist there is no objective truth, only the claim that the end justifies the means. Responsibility, evil, goodness and moral judgement are necessarily something collective without a clear concept or manageable moral definition. Indeed immoral acts, such as lying, dishonesty, cheating, stealing, killing, are often falsely elevated to the status of moral virtues under the description of the "right act" - that being the act required to bring about the perceived greater good of humanity.

This has led not to peace but to the condoning of a culture of death that now sanctions - often imposes - everything from contraception to abortion, homosexual activity, sex outside of marriage, divorce, sterilization, in-vitro fertilization, pornography, embryonic stem cell research, cloning, euthanasia and even false notions of a just war.

What then is peace? We know that Jesus gave us peace as a parting gift: "'Peace' is my farewell to you. My peace is my gift to you"(John 27). Jesus further elaborated: "I do not give it to you as the world gives peace." Peace, then, is not something found "here" or "there" but rather it is something already in our midst.

Ironically, to achieve peace, a certain violence is necessary: "The Kingdom of Heaven suffereth violence" (Matt. 11:12). This violence is not that external wrath we often commit against our neighbour in the name of peace, but rather it is the internal violence against self, against its selfishness, greed, lust and pride. It is the sword that strikes all within us which makes us despise our neighbour.

Man has nothing to lose but the chains of sin, which darkens his intellect and weakens his will. By throwing off sin through the merits of Christ, man becomes a child of God, an heir of Heaven, enjoying inner peace in this life and even amidst its trials, and an ultimate and final ecstasy of love in heaven. Only by dying in Christ and by conquering oneself can true peace be achieved.

Let us then carry into the world the maxims and examples of the gospel. Instead of proclaiming the praises of wealth and power let us acknowledge to ourselves and others that there are other sources of happiness and success. Let us convince ourselves and others that virtue carries with it rewards even in this world and that the peace of a good conscience is worth infinitely more than false pleasures.

We can, no doubt, bring the gospel to men most effectively by our own example for no one can help but admire those who live according to their own convictions. This means that we must make no concessions to the world either to please or to be esteemed. By our good example we can infuse into others the courage to fight steadfastly against the tyranny of the world, the flesh and the devil.

Jesus states: "Abide in me, as I do in you"...If you abide in me, and my words abide in you, ask whatever you will, and it shall be done for you" (John 15:7). If we make time for God, Jesus will abide in us, and our hearts will become afire with His love and peace... and he will give us everything we need to go out to the whole world to proclaim the Good News, and to bear fruit!