In Vladikavkaz, a family couple decided to refuse from their adopted daughter, who had been living in their house for 14 years. The parents filed a lawsuit to refuse from the adoption; a court of Vladikavkaz upheld the suit. The girl, who turned 17, will have to return to the orphanage. It was said that she had a serious illness. The girl has been staying at hospital for about a month. 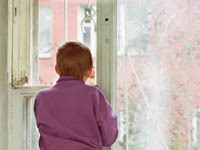 Aza and Ruslan Tebiev adopted the girl when she was three years old. During all that time, they acted as the legal parents of the girl. An official representing law enforcement authorities in North Ossetia earlier reported that the refusal was based on family arguments. The adoptive parents violated the secrecy of adoption in one of the fights, having told the child that they were not her biological parents.

The Komsomolskaya Pravda newspaper quoted the argument that was pronounced in court. The adoptive parents have failed to find an approach to the girl during 14 years of living with the child. It was also said that in addition to the girl, the Tebievs were raising their own son.

"The claims from Aza and Ruslan Tebiev shall be upheld - the adoption shall be canceled," the judge said Thursday.

It is worthy of note that the parents had previously filed another suit to withdraw the last name, first name, birth date and information about her parents, which she received during the adoption, from her birth certificate. The court rejected the suit, and the data assigned during the adoption were retained.

In addition, the court ruled the parents should assign a quarter of their family income to support the child afterwards. The parents will have to make the payments on a monthly basis until the child reaches full age.

Meanwhile, the girl's parents did not appear at court for the announcement of the court ruling. Their court representative withheld comments, having only said that the plaintiffs had used their legal right.

She described her student as "a very warm, open and generous child." According to her, the girl told her once that her adoptive parents used her as a toy and then threw her out. "It will be hard for the child to survive this betrayal," she said.

The lawyer of the twice orphaned girl told the Komsomolskaya Pravda newspaper that she was very concerned about the mental state of the teenager. The lawyer did not unveil the details of the argument that made the parents refuse from their adopted daughter.

"We are acting in the interests of the child and would not want the details of her private life appear in the media," said the lawyer.