Can God save Queen Elizabeth II?

In the minds of most people, Great Britain is associated with a strong, stable monarchy. Everyone is accustomed to Elizabeth II, who has been on the throne of the monarch for over 60 years. On the surface it seems that Britain has no problem with it, everything is settled and no one plans to change it. But is this the case? What do simple people think about the British monarchy? 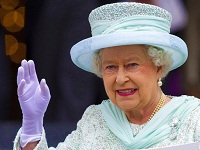 The British Queen lost her driver. The long search yielded no results, and the Buckingham Palace has decided to use modern technology and place a vacancy on the internet through the official website of the British royal family.

According to the announcement, the candidates for the job of the Queen's driver must have a full driving license and a great deal of experience. The Queen expects her personal driver to be tactful and have great communication skills, as well as the ability to use e-mail. The Queen's driver should be a team player, have motivation, and adhere to high standards in their work.

The annual salary of the Queen's driver is 23,000 pounds (about 36,000 U.S. dollars), which is slightly below the average wage in the UK. The driver would spend 48 hours behind the wheel a week. During long trips the driver will be provided free food and lodging.

Meanwhile, we all know that Elizabeth II loves to drive. Recently, the national television showed a video in which the Queen was driving an SUV in her favorite Scottish estate, Balmoral. However, in the official visits the monarch must be accompanied by a driver. Earlier, the British Queen was looking online for a senior gardener for Scottish residence. The royal family should be very carefully selecting the staff for the residence, because there were cases when maids, drivers, and gardeners have turned out to be journalists, and then the media reported about the daily life of the monarchs.

This raises a legitimate question: why do the British spend on the monarchs? What does the Queen do? The Queen of England is the head of state. She contributes to the social and political life of the country, performing duties as assigned by law, taking part in various ceremonies and representing England in the world. The Queen is a constitutional monarch who has power limited by regulations and laws. She cannot govern as the Russian tsars used to. She is not involved in the legislative process or in the process of governance.

The Queen is a symbol of stability and unity of the United Kingdom, as well as the many countries that are part of the British Commonwealth of Nations. The Queen plays a purely formal role in the creation of new or changing of old laws, but she always has a right to express her opinion. The Queen speaks at the opening of a new session of the Parliament, addressing both Houses. She provides suggestions on the work of the Parliament and lists bills that need to be considered and adopted.

The Queen still has some significant rights - such as the right to appoint the Prime Minister and dissolve the Parliament. The Prime Minister is usually the leader of the party that won the elections, but the Queen, in exceptional cases, may appoint someone else. To date, the influence of the Queen on the affairs of the state is mostly formal. She can express her opinion to the Prime Minister at the government's weekly audience, but still has to act on the advice of the ministers.

In late spring, the research company ICM conducted a study in which it interviewed 1,003 people across Britain. The poll found that the support for the monarchy is stable. The British did not want a revolution. Most believe that the monarchy is still relevant to the national life and makes Britain a respectable state. Increasingly more people think that the British monarchy is a unifying national institution. Only the supporters of the Labour Party have the opposite point of view - in their opinion, the monarchy divides the society.

The national belief that the monarchy improves the image of the UK from abroad is strengthening (60 percent). Most people (69 percent) of all social groups and beliefs are confident that without the British monarchy the situation would have been much worse. However, only 22 percent of the respondents spoke against the monarchy. In Scotland, however, 36 percent said that the country would be better off without the monarchy, while 50 percent supported it. The opinions about who should be the heir to the throne were divided. If the Queen dies or renounces the throne, 39 percent of respondents believe that the king should be the Prince of Wales, and 48 percent believe that it is necessary to skip a generation and appoint his son, the Duke of Cambridge, crowned William V.

Despite the polls, it is difficult to unambiguously identify the attitude of the British to their Queen. To say that Elizabeth II is fervently and sincerely loved would be an exaggeration. The Queen perfectly fulfills her ceremonial duties and tries to keep the image of untarnished purity of the august family.

However, this is very difficult. Think about the love life of her family, from Prince Charles to the grandchildren, and scandals in which Prince Harry was involved. Queen Elizabeth II has made much effort to hide her life from others. This detached manner helps to ensure that the monarch is seen as a sacred figure, devoid of ordinary human weaknesses. In contrast, the source of the financial support of the Queen and her family is no secret. The information of principal cash flows is available to the public.

The English crown estate is estimated at $2 billion, while the assets of the Queen are four times cheaper. The difference is explained by the fact that nearly all of the real estate used by the royal family, with the exception of a few castles and residences, does not belong to the monarch and the monarchy. The Queen uses them solely because of her status. To date, the majority of Britons support the monarchy, but the situation in the world is changing rapidly, and we shall wait and see if it remains so in the future.