The Saudis have made an original proposal - to build a town designed specifically for women. The project is designed for the ladies who want to build a career, but do not know how to reconcile this desire with the strict Sharia law, limiting them to the world of the husband and children. The city is expected to create 5,000 jobs. 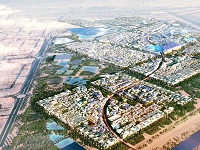 The kingdom of Saudi Arabia came up with a way to combine the ancient traditions and modernization. According to the Daily Mail, the next year construction of the city where women and only women can work will commence. The authorities of the eastern province of Hafuf, where, apparently, the construction will unfold, announced that they expect some $130 million of investment, which will create 5,000 jobs in the textile, pharmaceutical and food industries.

Although women in Saudi Arabia are allowed to work, only a few dare to do so. According to the local statistics, only 15 percent of the local labor market accounts for female workers. Building a career in a patriarchal society is problematic not only because women were relegated to the role of wives and mothers only - they are allowed to leave the house only if accompanied by a man.

"The attitude towards women's issues in Saudi Arabia is very particular. They are trying to create an image of the state that is ready to solve women's problems, but in reality the local authorities are happy with the present state of affairs. They certainly are not going to change anything and democratize the society. Only recently women were allowed to drive cars and even then with a strong reservations and conventions", told Pravda.Ru an expert of the Institute for Strategic Studies and Analysis Sergei Demidenko.

In his view, the idea of ​​"women's city" can be perceived as nothing more than oriental humor. "How is it technically possible to arrange? Will women be gathered from across the country and sent to work?" In addition, any city, or even an office center, cannot do without utilities. Would plumbers and electricians be women as well? It seems that so far the project looks more like an attempt to improve the country's image in the eyes of the West. The stated amount of investment also seems overly modest. For example, a project of eco-city Masdar in the UAE is estimated at 22 billion dollars.

Masdar will be built near Abu Dhabi. The project started in 2007, but real steps towards the construction were taken only recently. Masdar ("the source" in Arabic) is conceived as the most environmentally friendly city on the planet.

There will be no carbon emissions and hazardous waste from the industrial production. Most importantly, there will be no cars that are major polluters of the environment. Local residents (Masdar should have no more than 50,000 people) will have to travel via public transit that runs on electricity. This public transit is only called public in the sense that it would not be privately owned. It may as well be called personal since it will carry no more than six people. This is sort of an unmanned taxi that will wait for passengers in a variety of city parks.

Masdar will use a variety of alternative sources of energy - solar panels, wind turbines, as well as the latest technological developments that have not been yet revealed. Another unique feature of the city is that it will be covered with a net of intricate woven designs. On the one hand, it will save it from the scorching sun. On the other hand, it will create a cozy chamber-like atmosphere, combined with lots of lawns designed for relaxation.

The city of the future should be completed by 2023. Despite all the fantastic "gadgets", this project looks much more realistic than the Saudi "city of women."
Svetlana Smetanina