According to the WHO, in 2010, 107,000 both legal and illegal transplants of human organs were carried out. Two-thirds of all transplanted organs are kidneys. Experts believe that ten percent of all kidney transplants are illegal. The organization Organ Watch provided a different number - from 15 to 20,000 illegal operations a year. 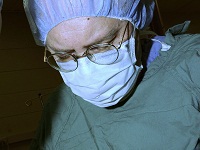 At least two illegal human organs transplantation surgeries performed in the capital of the Republic of Kosovo trace back to Germany. In 2008, according to the newspaper Spiegel, in the clinic of Pristina 74-year-old German businessman named Walter (last name is not mentioned for obvious reasons) of the State of North Rhine-Westphalia has been illegally transplanted an organ from a 50-year-old Russian woman Vera Schewdko, an immigrant to Israel, who sold her left kidney for 8,100 euros.

When the businessman landed on the hospital bed, the medical verdict was harsh. He had a few months to live, and his family began to seek ways of approaching illegal traffickers in human organs. They saw a television documentary story that condemned the inhumane practice of trafficking human organs. But as Walter's health deteriorated, his relatives saw saviors in the villains. Since the television show named no names, they asked the author of the story to provide them with contact information. In July of 2008, Walter flew to Istanbul to meet with one of the mediators and then got on a plane to Kosovo.

Vera Schewdko was on the same plane. A few months earlier she emigrated from Moscow to Israel in search of a better life. She worked as a maid at a hotel in the Promised Country, and her salary was desperately small to be able to bring her 10-year-old daughter Nastya into the country. When talking on the phone to her daughter, the child cried all the time and asked her mother to come get her. Vera was divorced, and could not visit home often due to lack of money.

By chance on a bus station in Tel Aviv she stumbled upon a free Russian-language newspaper with the announcement of the purchase of organs for transplantation. When Vera called the advertiser, the person on the other side of the line promised to pay her 10 thousand dollars in cash, or 8,100 euros. From the airport, they headed to the outskirts of Pristina, where a clinic partially funded by a German doctor was located.
Journalists from Spiegel who unveiled the story correctly pointed out that it did not look like a charity story when one person saves another in a desperate situation, and not just because Vera was paid 8,100 Euros. This situation has exposed the structure of the illegal trade in human organs cashing in on human health and distress with no qualms.

Special investigator, Canadian Jonathan Ratel, argues that in Pristina a network of international human organs dealers along with unscrupulous doctors, starting in 2010, took kidneys from 20 or 30 hospital patients to be used for transplants for paying patients.

According to the site wsws.org (World Socialist Web Site that publishes materials of the International Committee of the Fourth International, IKVI), gangs of traffickers in human organs make millions in profits in this illegal business. According to the unanimous opinion of the majority of reputable media outlets, the cost of any human body organ intended for transplantation is estimated at 200,000 dollars or 160,000 euros on the black market. The dealers shamelessly use the plight of the donors. However, these people are often deceived and paid only part of the agreed amount, and at times they are left with nothing.

Republic of Kosovo is considered the "capital" of the illegal trade in human organs. Initially it was caused by the war launched by the leading powers of Europe and the U.S. that led to the disintegration of Yugoslavia. Organs were removed from the killed or captured Serbs for transplants for wealthy customers. This was the birth of an illegal business - trading in human organs. Until 2008, the surgeries with illegal organ transplants were carried out in Pristina.

Evening newspaper Hamburger Abendblatt wrote that back in 1995 a colleague of the two suspected doctors from Göttingen questioned the legality of a large number of organ transplant surgeries. Now, 23 organ transplant surgeries performed between 2010 and 2011 are under investigation. 45-year-old surgeon Aiman ​ and 60-year-old gastroenterologist Giuliano are being accused of corruption and suspected of murder through negligence.