China maintains its leadership in the world of sport. Only in three days of the 2012 Olympics, Chinese athletes won nine gold medals. There was a scandal involved as well, when the Americans accused 16-year-old Shiven, who set a world record in 400 meters swim, of the use of doping. However, all Chinese swimmers easily passed a doping test.

One of the most impressive victories of the country's national team was in the 2008 Olympics in Beijing. At that time China won 51 gold medals, while the U.S. managed to get only the 36 gold medals, taking the second place. What is the secret of stunning victories of the Chinese Olympic team? 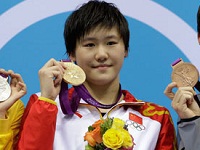 For many years children's sports schools fully funded by the government have been functioning in the country. It is difficult to say exactly how many of them China has, but, according to conservative estimates, there are no less than 15,000 of these private educational institutions for young athletes in the country.

The training camps for children retained the traditions that were laid under the communist system. They have undergone some changes, but China remains a one-party communist dictatorship. It is because of "valuable guidance" from above, and government funding China could develop a super-efficient system of training young athletes that has no analogues in the world.

The principle of China's sports schools is the most rigorous selection of capable kids and grueling workouts. Education begins at age of six. As a rule, children in these schools learn the same things as everyone else, but after school they have to spend hours practicing in the gym under watchful supervision of strict coaches. Western journalists have repeatedly drawn attention to the dire conditions of training that are too much for any European adult. However, it would be wrong to portray the Chinese children in such institutions as subjected to violence. Training in sports schools is voluntary, but many parents are willing to pay a hefty sum for the sake of giving their child a chance to break into the Olympic Games.

However, one must admit that excesses do occur in the rigid system of sports education in China. In videos spread all over the Web one can clearly see teachers slapping their students on the head for not coping with their tasks.

In addition, not all young athletes - even those who managed to learn and achieve something - can expect a bright future in Communist China. The fate of the Chinese Olympic team is well described by Qatari TV channel "Al-Jazeera."

Zhang Shang, World Student Games gold medalist, is now panhandling on the streets of Beijing. He made a promising career as a gymnast, but ten years ago was forced to withdraw from the sport due to an injury. His Olympic dreams were shattered, and a young athlete tried to find alternative employment. But time after time, potential employers rejected his candidacy because of lack of theoretical training. The young man was engaged in petty theft and jailed. Today, Zhang is homeless.

It turns out that Chang is not the only athlete who is faced with acute distress. Retired Chinese athletes complain that they suffer from unemployment because the government often does nothing to further their education and ignores their injuries, reported the TV channel.

This raises a question: Why are the sacrifices for the sake of China Olympic gold? Is it too high of the price for the won awards?

Thousands of Chinese children, who are not destined to become Olympic champions, spend time and enormous efforts training in sports schools, but their fates are often tragic. However, in the present circumstances, when the success of the Chinese national team in the international competitions is obvious, the government likely will improve the existing system of training athletes than change its principles. In addition, athletic schools promote health of the nation, Chinese officials believe.

In any event, the sports community in the U.S. and Europe (and Russia is no exception) are facing the fact: China is the undisputed leader of the Olympic Games in the beginning of the 21st century and in the coming years would continue to improve the preparation of its athletes. The main focus will be on the sports in which China currently lags behind its rivals. Will the Americans and Europeans learn from the Chinese experience, realizing the shortcomings of the Western system of training for future Olympians, or will they continue to protest the victories and records of China allegedly caused by the use of banned substances?

This question may seem provocative. However, the reality is that Western countries and Russia will sooner or later have to think seriously about changing the system of training their Olympic athletes not to remain in the shadow of the power of sports in China.