The whole Russia was shocked with the atrocious murder of nine-year-old girl Anna Prokopenko in Russia's Pyatigorsk. The murderer was arrested several days after the girl's body was found in the woods. The murderer, Vladimir Ambartsumov, told the police that he came up to the girl in the street and offered her a job. Anna, not suspecting anything wrong, agreed to go with the pedophile to his office. 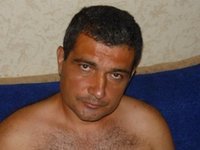 The investigative experiment took place on August 1 in the forest, where the schoolgirl's body was found. According to Ambartsumov, as soon as he and the girl reached a deserted place, he immediately attacked her. The girl began to scream and tried to escape, but the criminal ordered her to remain silent and raped her several times. The schoolgirl was trying to escape from the hands of the strong man, but was unable to do so - she only scratched him. After Ambartsumov abused the child, he strangled the girl and carried her body to another place.

During the experiment, police officers made the suspect wear a bulletproof vest. Riot police were on duty nearby. Apparently, the police were afraid lest the girl's relatives or local residents should lynch the murderer. As it turned out, the suspect in the murder of Anna Prokopenko was involved in another crime.

"It was revealed that Ambartsumov raped a young woman in Pyatigorsk on July 3, 2012. He committed the crime when he was staying at the woman's home," the press service of the Investigative Committee of the Stavropol region told Pravda.Ru. In addition, Ambartsumov had recently been released from prison.

Local residents helped detectives find Anna Prokopenko's killer. The suspect's composite sketch had been changed several times as new details of the killer's appearance emerged. As a result, the sketch photo became almost 100% identical to the real photo of the wanted man. The murderer was identified by his own neighbors, who went to police immediately after they saw his photo.

The suspect in the murder of the girl agreed for the procedure of DNA expertise.

"Ambartsumov, being completely sure that he had not left a trace of his DNA on the girl's body, voluntarily agreed for forensic DNA analysis, - officials from the Investigative Committee said. - The results of genetic expertise confirmed that the biological traces found on the girl's clothes belonged to Ambartsumov. In addition, when studying the recordings of surveillance cameras, the investigators found that the man who was seen next to the girl shortly before the crime looked like Ambartsumov."

The footage from one of the cameras showed Ambartsumov and Anna Prokopenko walking down the street. The child is actively talking to the man. The video showed the last several minutes of Anna's life. Investigators said that the girl willingly followed Ambartsumov when he offered her a job. The alleged killer told her that owned his own business to distribute cosmetic products. He told the girl that she would suit well for a promoter. The girl agreed, and Ambartsumov offered the child to discuss details in the office. The schoolgirl from a common family gladly accepted the offer and followed the man.

Anna Prokopenko disappeared from a playground on July 23rd. Dozens of volunteers started looking for the girl when she did not return home that day. The girl's body was found two days later, on July 25, at the foot of Mount Mashuk. Witnesses said that they had seen Anna walking away with a stranger. Two suspects were arrested: the guard of a construction site located near the playground, and a suspicious man, who was standing aloof from all at the girl's funeral. As it turned out later, none of them was involved in the murder.