War against Russia is a road to hell

On June 22, Russia remembers the summer day of 1941 - the day when the Great Patriotic War began. There was also the Patriotic War, the 200th anniversary of which will be marked this year too. It was almost the same time of the year, when Napoleon crossed Russia's borders and threatened to destroy the country. Napoleon and Hitler had to experience very hard times when they dared to attack Russia. 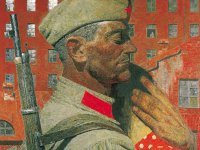 Many people will find these coincidences highly interesting.

This information seems to be very surprising indeed. It was available during the Soviet years. However, one had to search thick textbooks on history and encyclopedias to be able to make such comparisons. Nowadays, it is enough to search the Internet.

Many researchers point out similarities in the origin of Napoleon and Hitler, who did not belong to the title nation. Corsica became a French territory a few months before the birth of Napoleon. Austria became a part of Germany as a result of Anschluss, which was conducted under Hitler as a politician. The same cane be said about Stalin too.

However, it is clear that there are more differences than similarities between the two politicians. There was only one major similarity in their lives - they attacked Russia and they had to pay for that.

"The peace that we will conclude will put an end to the disastrous influence, which Russia has been showing on Europe for 50 years. I am going to Moscow, and I will finish it all off in one or two battles. Emperor Alexander will be begging for peace on his knees. I will burn Tula and disarm Russia," Napoleon said.

Adolf Hitler said: "We continue where things ended six hundred years ago. We stop the endless German procession to Southern and Western Europe and turn our eyes towards the land in the east. We finally complete colonial and economic politics of the prewar period and move on the territorial politics of the future. But when in today's Europe we speak of new land, we can think only of Russia and the states bordering on and subordinate to it." "German Armed Forced must be prepared to destroy the Soviet Russia in a short-term campaign before the war against England comes to an end," he wrote in the directive for Operation Barbadossa.

Adolf Hitler did not listen to his country-fellow and the creator of the Second Reich, Otto von Bismarck. Bismarck wrote: "Even the most favorable outcome of the war will never lead to the decomposition of the main forces of Russia, which is based on millions of faithful Russians ... The latter, even if they become separated as a result of international treaties, they will quickly re-connect with each other, as the particles of the cut piece of mercury. This indestructible State of the Russian nation is strong for its climate, territories and its simplicity, as well as for the need to defend its borders constantly. This State, even after complete destruction, will turn into a revengeful enemy."

The above was written more than 50 years before Operation Barbadossa. So it was Hitler, not Napoleon, who did not learn the lesson. Napoleon did not listen to his generals and ministers either. French general and diplomat Caulaincourt strongly strongly advised Napoleon to renounce his proposed expedition to Russia. "The war against Russia is a road to hell," he said.

There are many reasons to explain the death of the Great French Army and the German Wehrmacht on vast Russian territories. "Different nations gave different examples of human ideals. For Chinese - it is a wise man, for Hindu - it is an ascetic, for Romans, it is an emperor, for England and Spain - an aristocrat, for Prussians - a solider. Russia is seen for the ideal of its woman," German researcher Walter Schubart wrote in his work "Europe and the Soul of the East."