Burqa serves as protection rather than weapon

Many people in the world, especially women, may often feel sorry for women of Islam. It is generally believed that Muslim women are not allowed to oppose their husbands, that they hardly have any rights, that they are supposed to wear burqa all the time, and so on and so forth. However, if we take a closer look at this problem, it appears that Muslim women are just as suppressed as women of other cultures. 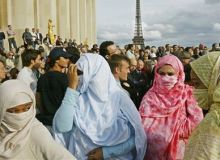 It turns out that the black overalls that many Muslim wear every day are not actually mandatory. It is up for a woman to decide whether she wants to wear the burqa or not. Nobody, not even her husband, makes her wear the black clothes that cover every inch of her body and leave only a narrow opening for the eyes. Burqa is not a religious attribute either. These clothes are quite practical. Oriental women have several reasons to cover their faces.

One of them is a historical one. In ancient times, influential men would very often kidnap beautiful women to make them their concubines and servants. This was common practice during both war and peace years. To avoid this unpleasant experience, women would mutilate themselves by scarring their faces. Oriental women simply decided to cover their face with veils and headscarves.

Protecting women from violence is not the only reason, though. It was not so very long ago, when European women discovered that they could slow down the aging of their own skin if they protected their skin from sunlight. They can use umbrellas, sun creams, tinted windows and other benefits of the civilization. However, many of those things can be either dangerous healthwise or uncomfortable to use. Muslim women covered their faces with natural fabrics that became their protection from the scorching sun, powerful winds and evil people.

The net-like veil, known as chachvan, which covers the eyes, should not be associated with prison bars. This net-like veil serves as sunglasses. Those "sunshades" were invented in the East long before something like that was designed in Europe. Many European women still wear veils on their stylish hats, and they do not feel like victims at all.

It is worthy of note that many Oriental men cover their faces too. They only do it to protect themselves from the sun and the wind that throws sand in their eyes.

The word "burqa" means a baggy, long-sleeved overall. This garment would be worn by men and women alike, with no discrimination factor involved. Afterwards, women modified it to a very long head-to-foot veil. They designed an umbrella without a handle, so to speak. Afterwards, there was special headwear designed to cover women's face - the niqab. This garment consists of a headband and two kerchiefs. One of them covers the face, while the other one covers the hair.

Like we mentioned above, all this protection gear is not necessary at all. If women do not wear those clothes - they just do not wear them. However, a Muslim woman must wear hijabs, or headscarves. As a matter of fact, hijab is a word that designates all garments that Muslim women wear. In the West, the notion of hijab was diminished to only a headscarf. Clothes may change, but the scarf should always cover Muslim woman's head. Noteworthy, many women in Ancient Greece and Rome would cover their heads with fabric. Indian and Jewish women used to do the same.

It may seem strange, but Russian women also have the tradition of covering their heads with headscarves. For many foreigners, a Russian babushka is an image of an elderly lady wearing a headscarf.

Women in many cultures used to wear and still wear scarves as a decoration. Instead of changing their hairstyle, women would change their headscarves.