In the equation that constitutes a crowd of soccer fans, drunkenness, high levels of testosterone and an exponential notion of nationhood, national pride, primary reactions and moronic idiocy are a constant factor. However, as expected, the international media is attributing too much attention to Russian soccer fans and not enough to the culprits. 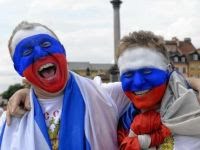 "Russian football fans" was the centre of attention of the international media on June 12, Russia Day, in Poland, when groups of fans from both sides were involved in fighting. The political hype was easy to see, for after the headlines in the lead paragraphs were references to "tension" between Russia and Poland, "The Cold War", "Russian dominance of Poland" for forty years, and "historical wounds".  Some outlets of the Polish media tried to rub salt into old wounds, referring to the Battle of the Vistula in 1920.

Dominance? Russia freed Poland from the yoke of Fascism and Poland's governments were constituted by Poles, not Russians. And what wounds? For freeing Poland from Nazism? The attempts to create a political slant to this story and obviously, as usual, an anti-Russian one, are as ineffective as they are puerile.

For a start, first, are soccer fans worried about the "Cold War" second, do they even know what it is and third, how many of them remember the Battle of the Vistula? Secondly, those involved in the fighting were young males; it was a hot day; they drank beer - a lot of beer - and in many cases Polish vodka; the game started late and some five thousand Russian fans walked to the stadium, shouting slogans, as soccer fans do - loudly, as soccer fans with bellyfuls of beer are wont to.

It was then that groups of Polish fans descended upon them, throwing bottles, kicking and punching and learned the lesson that when you attack a man, he fights back, as the Russian fans did. The Poles started it, the Russians finished it. End of story?

Not quite. Isolated incidents continued in the stadium among an extremely small sample of fans from both sides, isolated incidents took place after the game, which ended in a draw. These events involved incidents in which the Polish fans were fighting among themselves and then with the police - so where was that story in the media?

It was a soccer match. Russian Soccer fans marched together and shouted. They were attacked by Polish hooligans. They fought back. Some Poles got a bloody nose. Other Poles got drunk and started fighting with the police. Period.

Most of the Russian and Polish fans enjoyed the game together peacefully, the vast majority hugged and shook hands afterwards and drank together into the night, in a climate of mutual respect and friendship. Let us not politicise these events, let us not look for trouble where it does not exist, let us not blame the Russians for everything when we are speaking about a game of football.

Those who do are even more moronic than a marauding gang of drunken soccer hooligans - about as low and as primary as the human race can get.