There are many glorious pages in the history of the discovery and study of the Russian Arctic. But there is a special chapter that started the heroic polar development. 75 years ago, on May 21, 1937, polar air expedition of the USSR reached the North Pole and landed research station "North Pole-1" on a drifting ice for the long nine months. 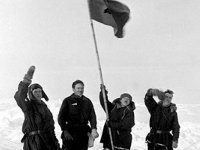 This expedition began systematic exploration of the Arctic basin, making navigation through the Northern Sea Route regular. Its members were to gather data on atmospheric phenomena, meteorology, geophysics, and Hydrobiology. The research was led by Ivan D. Papanin, his coworkers were a hydrologist Peter Shirshov, geophysicist and astronomer Eugene Fedorov, and radio operator Ernst Krenkel. The expedition was led by Otto Schmidt. Mikhail Vodopyanov, a hero of the Soviet Union, was the pilot of the flagship N-170 aircraft.

It all began on February 13, 1936, when in the Kremlin at a meeting of the organization of transport operations Otto Schmidt outlined a plan of an air expedition to the North Pole and basing a station there. Stalin and Voroshilov instructed the Directorate General of the Northern Sea Route to organize an expedition to the North Pole in 1937 and deliver equipment for the research station and wintering.

A squadron of air expedition of four four-engine aircraft ANT-6-4M-34R "Aviaarktika" and the twin-engine reconnaissance P-6 was formed. Reconnaissance pilots Vodopyanov and Makhotkin in the spring of 1936 went on to select a location for the intermediate base on Rudolf Island (Franz Josef Land). In August icebreaker "Rusanov" went there with a cargo for the construction of a new polar station and airport equipment.

The expedition was prepared by the entire country. For example, a tent camp was made by a Moscow factory "Kauchuk." Its frame was made of aluminum tubing that could be easily disassembled, canvas walls were laid with two layers of eiderdown, and rubber inflatable floor was also to preserve heat.

The Central Radio Laboratory in Leningrad produced two radio stations - a powerful 80-watt and 20-watt emergency one. The main source of energy was two sets of alkaline batteries, charged by a small wind turbine or dynamo - lightweight gasoline engine. All equipment, ranging from the antenna and ending with the smallest spare parts, was made under the personal supervision of Krenkel, and the weight of it amounted to half a ton.

On May 21, 1937 at five in the morning, aircraft of Vodopyanov rose into the air from the island of Rudolph. Throughout the flight, the communication was supported over the radio, clarifying the weather conditions and nature of ice cover. During the flight, an accident occurred: in the upper third of the radiator a leak was formed in the flange, and antifreeze began to evaporate.

Until the landing the mechanics had to deal with the consequences, sticking out their bare arms in cold and swift winds. At 10:50 they have reached the Pole. On May 25 the rest of the aircraft were allowed to get started.

After landing at the North Pole, researchers have made many discoveries. Every day they took samples of soil, measured depth and drift velocity, determined coordinates and made magnetic measurements, as well as hydrological and meteorological observations. Shortly after landing there was a drift of ice where the research camp was located. The journey to the North Pole in 274 days was done on a piece of ice 200 by 300 meters.

Then the expedition decided to evacuate. Icebreaking ships "Taimyr" and "Murman" took the heroic four off the ice on February 19, 1938 a few dozen kilometers from the coast of Greenland. In March, the polar explorers were taken to Leningrad.

The scientific results obtained during the unique drift were presented to the Academy of Sciences on March 6, 1938, and were highly appreciated by specialists. Scientific members of the expedition were awarded degrees, and Schmidt and Papanin were awarded the title Hero of the Soviet Union. The other participants were awarded with the Order of Lenin.