A new fatwa recently issued in Saudi Arabia suggests that Supreme Mufti of the country will allow giving girls into marriage at the age of ten. However, he only legalized the existing orders: here eight-year-old girls, with the consent of their fathers, are married off to old men. 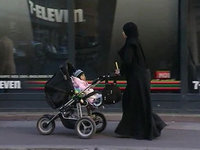 The laws of Saudi Arabia provide and even encourage the practice of early marriage of girls. "From ancient times due to the social, economic, political and religious reasons, early marriage has been always encouraged," Mansour Bin Askar, professor at the University of King Saud in Riyadh, said in an interview with Arab media. "During wars, early marriage allowed strengthening the family clans, as well as the influence of tribes that have been always judged by their numbers.

It would be wrong to look for the advantages and disadvantages of early marriage, because for each girl it has a unique character. It is important that, from a medical point of view, early marriage does not cause harm to the young bride," said Professor Mansour Bin Askar. He said that in marriage it is important to have mutual agreement of the parties. Especially, for the young bride who must confirm her decision before a Sharia judge.

The fatwa of Mufti of Saudi Arabia that legalized marriage of 10-year old girls reflected the realities of life of the kingdom. In very early age many Saudi girls already know whom they will marry. Suitors are chosen by their own fathers. If a daughter is a devout Muslim and obedient, her father can bestow her with a marriage to a relatively young man. If a daughter shows obstinacy, then she is usually given to the first available Muslim who agrees to marry her.

No one is a stranger to such a fate, not even a princess. For example, one well-known Saudi girl who suddenly began to argue with her father was married to an elderly Sharia police from a distant village. In his harem, she was the eighth wife. At the same time all the formalities have been met: the bride gave her consent to marriage in the presence of the judge. Her husband had harsh temper. Any objection to him was punished by flogging in front of the harem. Of course, this is not an indicator and many marriages can be called happy. In any case, the right of the first word belongs to the father of the bride.

Saudi Arabia in this regard has retained the literal interpretation of Sharia law. In this regard it is different from other Muslim countries that have long traveled the other way. For example, in Jordan, UAE, and Tunisia a clear minimum threshold for marriage is established for women - they have to be 15 years old. In Shiite Iran, the freedom of women had reached the point that men are afraid of becoming victims of sex discrimination. Arabist Leonid Isaev, a specialist in political processes in the Arab world, said:

"Saudi Mufti had the right to issue such a fatwa. Sharia provides for early marriage of girls. But the Muslim family law has certain nuances. Up until the girl reaches puberty, she is forbidden to have sexual relations. Before the onset of puberty, she will have to live only in her father's house. She moved into the house of her husband only after the onset of puberty. This requirement is spelled out in the Muslim family law in black and white.

In Yemen in the early 2000 there was a case where a man raped his official wife - a girl who at that time has not reached puberty. The girl died of severe bleeding. Sharia Court immediately punished the rapist to the full extent of Islamic law. But this girl was formally the wife of this man. This is only a formality.

In Saudi Arabia, once a girl turns ten years old, she is legally entitled to be a wife. Her father, as a rule, is looking for a husband for her. Next a formal marriage is concluded. Before puberty the wife lives in her father's house. After puberty, she moves into her husband's house, and they begin sexual activity.

Islamic law is largely based on precedent. For example, the Mufti issued a fatwa about a marriage, another mufti overturned it with his fatwa, and so on. Sharia judge examines each case individually in court.

Women's rights in the Islamic world are an ambiguous question. Sharia law protects women very well. Violence against women and abuse of women's honor is punished to the fullest extent of the law. Quite another matter is the realities of life. But Iran experience indicates that under the contemporary Islamic law women are much better protected than men. It is safe to say that modern Iranian men are more wary of inequality than Iranian women," said the expert.

Saudi women have plenty of reasons to be jealous of the Iranian women. For example, Iranian women are actively involved in sports, and the government is only encouraging it. In Saudi Arabia it is believed that because of sports a girl may "lose her virginity." Directors of a small number of female schools in the country evade the prohibitions of the religion as much as they can, and the girls secretly engage in aerobics or play volleyball. As for early marriage, it is heavily criticized by the Arab human rights activists. In 2010, another wave of criticism generated discussion in the Saudi community about banning the law on marriage of girls. Sheikh Abdul Aziz al-Teraifi, an official of the Ministry of Islamic Affairs of the country, was one of the most ardent opponents of such restrictions.

"The problem is artificially inflated by journalists who write about marriages of eight-year of girls to older men. Yes, it does happen, but it is an exception. Such marriages are consensual and made at the insistence of parents of the bride," the official said in an interview with "Saudi Gazette." According to him, "the prohibition of early marriage will have a negative effect on Saudi society, which is unacceptable to Islam."

In addition, establishing a minimum threshold of marriage will lead to a sharp decline of manners in the Saudi society. "The establishment of minimum age for marriage, for example, at age 18, will automatically postpone the deadline for the hijab. Thus, a girl of 18 years will be able to freely and openly interact with men and young people, which is absolutely contrary to the laws of Islam,"  Shaykh Abdul was cited by Saudi media.

In June of 2011, a Saudi theologian Sheikh Saleh al-Fawzaan went even further. He issued a fatwa where the obstruction of early marriage for girls was called a violation of the laws of Allah. According to the Sheikh, the fathers have the right to give their daughters into marriage, "even if they are still in the cradle. But the husband cannot join with them in the intimacy,"until a girl can withstand the weight of a man placed upon her." As an example l-Fawzaan brought Aisha, one of the wives of the Prophet Muhammad. Aisha became the Prophet's wife at the age of six, and entered into intimate relationship with him at nine. This is written in one of the hadiths that are followed to the letter.