Russia's break dance champion, the winner of over 30 cups and handfuls of medals, Yevgeny Smirnov, who performs at "Freestyle Masters" lost his leg due to medical negligence. The man's medical treatment has been delayed for too long, Life News reports. 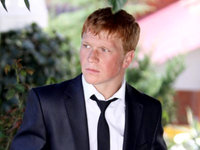 The 25-year-old dancer was hospitalized at the municipal hospital of the settlement of Lazarevskoye, in Russia's south, on May 1st, after a serious car accident. The young man was riding his scooter, when a car ran over him. The car literally swept the man's scooter away off the road. The man flew into a ditch and lost consciousness. An ambulance took him to the hospital soon afterwards.

Yevgeny suffered an open double fracture of his shin. The man was in a critical condition. He was taken to the emergency care unit immediately. However, the dancer's friends were asking the medics to transport Yevgeny to the regional center, the city of Krasnodar. This became possible only after the mayor of the city interfered.

"It was so hard for us to take Yevgeny to the hospital of Krasnodar. It is the hospital where we have best doctors in the region. However, we couldn't take him to that hospital for nearly a whole week," the man's friend said.

The man developed gangrene as a result of the delayed treatment. His leg had to be amputated.

"The patient is in a serious condition, but it's stable. He has already come to his senses, but we can not guarantee anything yet. Gas gangrene is spreading, The surgeons still take efforts to prevent the infection of the other leg," medics said.

Yevgeny Smirnov is an orphan. His friends now try to raise money for his further treatment at one of the best clinics in Israel. A concert in support of the break dancer will take place in the city of Sochy on May 19th. The concert will be free, but everyone will be offered to donate as much as they can to help the young man.