Reuters has recently reported that a family from Azerbaijan (formerly a republic of the Soviet Union) that lives in Germany as refugees could not change their Muslim names to German even at court. The news triggered a wave of criticism of the German justice. Many people were saying that Germany was not democratic enough as long as the country failed to help the family in need. However, a closer look at the issue shows that the problem is not worthy a twopence. 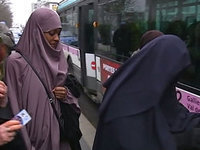 The refugees from Azerbaijan were reportedly given an opportunity to take the names that only sounded like German names. However, the names turned out to be a calque of the people's real Islamic names.

However, the head of the Azeri family proudly declined the suggestion and said that they would like to take absolutely new German names to prevent any discrimination that could occur in their lives in the future. According to the man, the difficulties for his family could arise either due to the complicated pronunciation of their real names or in connection with their religion - Islam.

"The fact that a surname is of foreign origin, or does not sound German, cannot alone be routinely presented as an important reason for a change of name," the German court ruled.

However, the immigrants, who come to the European Union, realize that the level of unemployment in Germany is one of the lowest in Europe. Germany gradually becomes a great attraction to immigrants from Europe and other parts of the world. A year ago, Germany lifted the quotas on the arrival of workers from Eastern Europe, which sharply increased the immigration flow to Germany from other countries - from Poland, for example. The Arab Spring increased the number of refugees by 11 percent last year. According to the UN, Germany is ranked third on the list of 44 industrially developed countries of the world that seem attractive to migrants.

Germany is not the only country where people's attitude to immigrants is abominable, to put it mildly. There are nearly 4 million Muslims living in Germany. Moreover, a recent report from Germany's Interior Minister Hans-Peter Friedrich said that the number of violent acts committed by leftist extremists (31.4%) had increased considerably in comparison with those committed by rightist extremists (2.7%). Unlike the right, the left prefer to play with migrants. To crown it all, the largest threat comes from Islamic terrorism, as before.

Let's take a look at other countries. The parliament of Sweden now has rightist members for the first time in the country's political history. Last year, Australian electors supported the rightists' suggestion to ban the construction of minarets and mosques in the country. During the recent elections in France, the majority of non-white French citizens voted against Sarkozy just because he was behind the law that banned the public wearing of hijab. The decision of the French government to expel ethnic gypsies from the country also stirred quite a commotion.

Now let's take a look at the United States of America - "the stronghold of democracy and tolerance". Last week, a family was not allowed to board their plane at Fort Lauderdale, Florida. The reason was very unusual: the name of the 18-month girl was included on the list of terrorist suspects.

The girl's father believes that employees of JetBlue airline paid attention to them just because they were the natives of the Middle East. The man's wife was wearing hijab (head scarf). The airline explained the incident with a computer malfunction the following day and apologized to the family. Needless to say that computers were not involved in the scandal at all.