It is difficult to find a person who has not heard the word "Versailles." In Latin versare means "to plow". To know this word, one does not need to be a fan of the beautiful architecture - just think of the Treaty of Versailles. First and foremost, it is associated with the name of Louis XIV.

330 years ago, on May 6, 1682, Louis XIV issued a decree whereby he appointed Versailles the main residence of the monarch court. This is how for 100 years (until 1789) he took the laurels of the French capital from Paris. 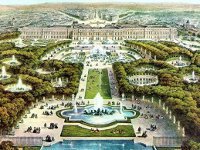 For the first time Versailles was mentioned in 1038. Its very name indicates that back then it was a small farm with arable land. In the 17th century the village of Versailles had nothing remarkable about it except for the ruins of a castle and a small mill. The land and property for the most part belonged to the Gondi family that lived there, a smaller part was in the king's possession. Louis the 13th, who was hunting in this area rich with game, would spend some nights in the medieval castle and some nights in the mill.

However, he liked this place. In 1623 the king ordered to build a hunting lodge 24 kilometers from Paris, where he first spent the night the year after. The hunting lodge was so modest that it did not even have a place for the queen's apartments: the dimensions were only 24 to 6 meters. Marshal of France, diplomat François de Bassompierre wrote in his memoirs about it as a "wretched castle, at whose sight even a simple gentleman would not feel envy."

The building was expanded only after the king has bought a piece of Gondi's land. In the period from 1631 to 1634 through the efforts of the architect Philibert Le Roy three wings were attached to the hunting lodge, and later a dilapidated castle was demolished altogether. The new wall in the baroque style was built with brick, sandstone and slate. This hunting lodge is the center of a luxurious palace and park of Versailles.

In 1660 his son, Louis the 14th, more ambitious than his father, decided to rebuild Versailles. The last argument in favor of the alteration of his father's old castle was made by Minister of Finance Nicolas Fouquet who allocated large sums on rebuilding of Versailles, and later was accused of embezzlement of finance and perished in prison.

Louis the 14th wanted to hold lavish feasts in the castle. In 1661 large-scale construction works began there. The erection of Versailles lasted for several decades, and often soldiers were called to aid in the construction work.

The greenhouse was designed by Hardouin-Mansart. There grew a variety of rare plants: over 200 gardeners took care of three thousand orange, pomegranate and tangerine trees. The massive building, despite the most severe austerity measures, cost the royal treasury over 80,000 livres.

The largest room of Versailles - Grande Galerie - was a gallery called the Mirror (La galerie des Glaces). Its length was 73 meters, height - 12.8 meters and width - 10.5 meters. In addition to the Palace of Versailles, one of the many love nests was built for the mistress of Louis 15th, Madame de Pompadour - Le Petit Trianon. It was subsequently occupied by the apartments of Marie Antoinette.

The last owner of Versailles was Louis 16th, who lost his head to the guillotine of the French Revolution. By a decree of Louis Philippe in 1837, the Palace of Versailles was restored and the Museum of the History of France was located there. Today, it is listed as a historical and cultural heritage by UNESCO.