Can anyone regulate women's decision to abort babies?

Is it possible to impose morality by force? Is human nature such that even under the most severe "pressure" it is willing and able to sin? In early March, the Ukrainian Catholic and Greek Catholic communities appealed to the Verkhovna Rada (the Ukrainian Parliament) with a sudden and radical proposal - to ban abortions in Ukraine.

However, were are not talking about the absolute ban on abortion - there are some exceptions in the form of "medically necessity" when continuing the pregnancy could endanger the life or health of the woman. Potential underage "moms" also fall into this category - of course, if they want the procedure. 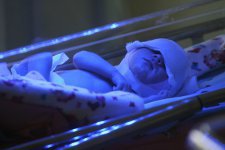 Bishops cited horrendous numbers in support of their position - two million abortions a year in Ukraine. However, the Ukrainian Health Ministry quickly denied this information, stating that even in the dashing 1990's with their continuous crisis and impoverishment of the population maximum of one million Ukrainian women terminated their pregnancies. Now, however, these figures had fallen six-fold - up to 153 thousand procedures a year, which is three and a half times fewer than the annual number of births.

Nevertheless, 150 thousand abortions is a significant number. If the prevention of pregnancy is disputed by theologians, with respect to a fetus already developed in the womb all Christian denominations are clear - it is a real human being with a God-given soul, and to take away this life is no less sinful than doing it to the child that has been born.

The initiative of the Catholic flock was coolly met by the Ukrainian Orthodox Church of Moscow Patriarchate.

The range of issues related to abortion is much broader than just its authorization or prohibition. Let's be realistic - the Church understanding of abortion as murder is not rooted in the minds of most of Ukrainians. Nearly 100 years ago the abortion legally ceased to be a crime, becoming only a private medical matter.

On the one hand, in the words of the Apostle Paul, childbirth is a woman's main mission in life. A normal pregnancy prevents malignant tumors and an abortion could make a woman infertile, forever depriving her of the possibility of maternal and family happiness.

On the other hand, bearing and giving birth to a chils is a very hard work. Not only has a woman to carry extra weight (while still working), there are such complications as morning sickness and mental changes. If a child is desired, the vast majority of women tolerate these difficulties with patience and understanding. It is a different situation if it is a single mother who was left by the father of the child.

In this respect the authors of the anti-abortion campaign say that if a woman does not want to have a child she can give birth and then leave it in the hospital.  The government, concerned with "low demographic indicators," is not going to offset the cost of even normal diet and medication for pregnant women. The sum of the benefits for a single mother is four times lower than the funds spent on one child in an orphanage and twice as low as the official poverty line.

According to statistics, after the release of orphans from state orphanages they are not provided with social housing and any other significant prospects, such as education and employment. Therefore, 70 percent of the orphan boys join criminal gangs, 60 percent of girls become prostitutes, and 10 percent in both categories commit suicide.

Needless to explain why, under such circumstances, many women prefer to take the life of their unborn child by abortion rather than entrusting their fate to the "caring" state.

The ban on legal abortion immediately provokes the growth of "abortion tourism." The latter is clearly seen in the example of Poland where the Catholic Church lobbied the law that has led only to the fact that Polish women choosing to terminate a pregnancy go to clinics in Ukraine, Belarus and Russia. It is easy to guess that Ukrainians would do the same provided they have funds.

Those who do not have sufficient funds will create the market of consumers of illegal abortions. We would be lucky if the "services" in this market are provided by doctors, and not some "grandmothers" in unsanitary conditions with potential life-threatening complications.

It is clear that the Catholic Church has solved the problem of abortion through the method proven many centuries ago. They have shifted the problem concerning the spiritual crisis of their flock to the state with its restrictive measures and the avenging hand of the law. Any ban is evidence of a very low moral status of the people. For example, there is no official ban on eating dog meat, but in the Christian culture it is simply not acceptable.

The right of women to abortion is a completely different situation. Some consider a new man or career, or a prospect to get a good husband to be more appealing than having a baby; some are afraid of financial difficulties. This is because all the above "values" are the foundation of the modern consumer society that recalls Christ only on the most important religious holidays. One hundred and fifty thousand unborn children killed in Ukrainian clinics is just the tip of the iceberg of the enormous lack of spirituality.

The problem of abortion has a simple and complicated at the same time solution. We need to "only" overcome the lack of spirituality. People (who are also citizens and voters) will then review their own values ​​and change behavior patterns - so that, perhaps, banning the abortion would not be necessary.

But for make this happen, the representatives of the Church have to make a great daily effort. It is much easier to request "a hand" of the state.

However, it seems that the initiative of the Roman Catholic hierarchy will not get much movement. The reasons are many. Politicians are not excited about a prospect of getting 150,000 new orphans a year. The most conservative estimate shows that this would absorb 10-12 percent of the Ukrainian state budget - a figure very deadly for the official Kiev that is humbly begging the International Monetary Fund for smaller amounts.

Serious politicians from the opposition are also not too keen on this idea. The actual leader of the Yulia Tymoshenko Block Alexander Turchinov very clearly stated his position: "As a Christian, I am totally against abortion, but this decision should be made solely at a referendum." Most likely, the noise will soon subside.

Yet, this is not a reason to give up. We should always be aware that there is no "revolutionary" legislation that would solve the problem of killing unborn children. This requires a long and painstaking work of the Church on education and revival of the human soul by the grace of God.