The struggle against smoking in Russia is entering a new level. The Russian government is expected to consider the bill that restricts the consumption of tobacco in public places, the Rossiiskaya Gazeta wrote. 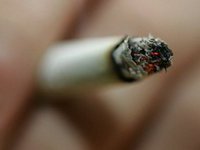 The document stipulates the banning of smoking in all catering institutions, governmental premises, work places (indoor premises), elevators, educational, medical, cultural and sports institutions, as well as all types of public transportation, railway stations and ports. As a result, smokers will be able to enjoy their cigarettes only in their homes and in the street.

The Healthcare Ministry developed the bill to execute the obligations, which Russia took in 2008 during the ratification of the World Health Organization's Framework Convention on Tobacco Control. Needless to say that the makers of tobacco products stood up against the project.

There were also officials, who referred to the project as "excessive" and "unfounded." As a result, at the end of last year, the international confederation of consumer societies sent an address to the Office of the Public Prosecutor to investigate the corruption constituent of the matter.

In the meantime, Gennady Onishchenko, the head of the Russian Federal Service for Protection of Consumers' Rights, said that one should publish pictures of smokers' lungs on cigarette packs. "I literally dream about it, I have dreams about it at night. If it happens, it will be one of the brightest days in my life," Onishchenko told Interfax.

"We need to ban smoking in public places. One has to pass corporate codes and dismiss such people from their jobs," the official said.

Russia is ranked first on tobacco smoking. Forty percent of the Russian population, which is 50 million people, smoke. There are 22 percent of women and 60 percent of men among the Russian smokers.

It appears that the Russian smokers are not going to sit on their hands and simply watch the government taking strict measures against them. They have already initiated the establishment of the All-Russian Movement for Protection of Smokers' Rights. The founders of the movement are the Russian Cigar Union and a regional public organization of Udmurtia Republic - "The Protection of the Interests of Small Business."

Those who initiate the defense of smokers' rights believe that the bill about the protection of population's health against the consequences of tobacco smokers violates civil rights. The bill stipulates (from 2014) the total prohibition of smoking in passenger transportation and near the entrances to railway stations and airports in the radius of ten meters.

The All-Russian Movement for Smokers' Rights gathered for the founding congress on Thursday, March 29. The participants of the meeting decided to start collecting signatures to veto the bill.

"The bill that they want to pass comes from the authorities. It does not take account of the rights of adult consumers of tobacco, who make their choice independently and who pay from their pockets. We suggest the bill should be vetoed for three years. I believe that the bill from the Healthcare Ministry contains an absolutely unacceptable detail - banning smoking in public places - in restaurants, airports, cross-country trains, and so on," Andrei Loskutkov, the President of the Russian Cigar Union said.