Regardless of all the things we heard about flash mobs, in the popular consciousness it is simply entertainment - a funny, absurd act aimed at surprising those not in the know. People react to flash mob with good-natured curiosity rather than irritation or aggression, the same way adults would react to a mischievous child. But is it as simple as it seems? 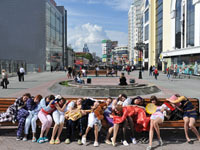 Disputes as to whether the actions of mobbers can be considered art have quickly subsided, however, there are certainly some features of theatrical performance in flash mob. Now, it is seen as a means by which people express their opinions, and sometimes achieve specific goals. According to a theorist of flash mob, sociologist Howard Rheingold, the next social revolution will be made by the "smart mob" with the help of new communication technologies.

Reinhold invented the term "smart mob" that lies at the heart of flash mob and related actions. Smart mob is a form of self-organization using online resources and mobile communications that allow strangers united by one idea to achieve certain goals. Followers of Reinhold adopted one of the areas of flash mob, invented certain rules and began to develop it. Every year the movement is growing, attracting new members.

Despite some allegations of provocative ideology, violations of public order and even hooliganism, psychologists argue that flash mob is useful. According to a psychiatrist Lisa Wagner, participation in a flash mob can help a person get rid of feelings of loneliness and depression, get away from everyday routines and overcome difficulties. Flash mob is similar to a psychological training. "Flash mob helps people to go beyond the stereotypical behavior, shake off other people's rules while feeling protected by a group of like-minded individuals," said psychologist and director of the Institute for Group and Family Psychology Leonid Krol.

However, there are those who are worried about flash mob, and their fears have nothing to do with violation of the public order. Rather, they fear the prospects of using "smart mob" for political purposes. After all, organized actions, even when they follow the rules, can result in something quite different and not always harmless. Sooner or later, the participants may feel tight within the narrow limits. In addition, critics of the movement believe that flash mob develops a sense of superiority, which may subsequently be directed against the society and law. Today certain trends have emerged that are close to flash mob, but differ from it both organizationally and ideologically.

Polit-mob or socio-mob - a protest designed to draw attention to certain issues. Example: after the elections in Belarus in 2006, several people gathered in central Minsk, opened the newspaper "Soviet Belorussia" and began tearing it into pieces.

X-Mob - rallies whose members try to evoke deja vu or sense of quiet insanity in passers-by. The witnesses of the action feel like there is something wrong with them as they see dozens of people who tie their laces, stumble, or utter the same phrase in a telephone conversation simultaneously.

I-mobile - a common name for the rallies held on the Internet, such as polls, voting or commenting in someone's support.

Extreme-mob - the action with a hint of extremism. The most famous example of an extreme-mob is public pillow fights.

Farshing - actions based on psychological extremes. Participants are invited to overcome their complexes. Their members wear tutus and tights to look like ballerinas, publicly shave their legs, or perform CPR on chickens.

What is flash mob: the fight against depression, a fun pastime or a dangerous permissiveness? It is no secret that the recent first rallies in Moscow and other Russian cities under the slogan "We are for fair elections!" with their mass character and organization were made possible because of the Internet. Network communication that initially was of the informative nature has formed a "smart mob" that took to the streets. This, in turn, clearly showed that new communication technologies are the power with enormous possibilities.

It is up to the participants how this force will be used. Flash mob is a new stage in the evolution of ways to organize people, and its future direction depends on everyone.