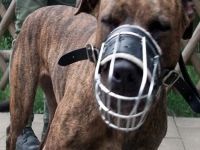 A monster dog went berserk today in London when five police officers tried to arrest its owner. The dog leapt at the police officers, seriously injuring their arms and legs to such an extent that they had to go to hospital; the condition of four of the policemen was described as "serious".

The attack took place on Thursday morning at around 09.00 GMT  in Albert Square, Stratford, East London, when the pit bull-type dog attacked the officers who were trying to arrest its owner. Blood was spattered all over the pavement outside the house after the officers were forced back by the savage monster hound.

The officers were trying to arrest a man in his twenties for grievous bodily harm and kidnapping as part of a massive anti-crime operation. The 25-year-old man is the owner of the dog and is still in police custody.

The police had to call in a squad of armed police officers from CO19 Specialist Firearms Command, who shot the dog dead after it had been contained by officers from the Metropolitan Police dog unit.

Dog attacks have risen nearly 80 per cent in London in recent years. Up to five thousand people per year are attacked by dogs in the United Kingdom. Around 80 per cent of these attacks are by forbidden species of animals.