Late congratulations from Obama, at last, he phoned Putin... 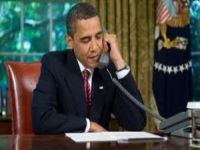 When you delay for a whole week to get on the red telephone and enter the number, you have already said much. Especially if it was supposed to be a congratulatory phone call. The delay tells the caller that you, in fact, are not bursting with happiness, that it is just a matter of following the rules of protocol, communicating with someone with whom you may be forced to negotiate.

There is no doubt that President Barack Obama said much in missing an entire week, from Monday-Friday, on the last working day of the week, and only then calling Vladimir Putin, elected president of Russia, to present congratulations on his election victory on March 4th.

In short, Obama made it clear that he was in no hurry, and therefore had little interest in that election. However, Moscow understood the message very well.

Washington made it implicit that U.S. interests will guide its policy towards Russia, that men make no difference. Then the State Department began to demand investigations into irregularities in the elections - despite the fact that the results pointed to "a clear winner with an absolute majority of votes." In short, Washington continues to give "sermons" about the slow progress in Russia on western-style liberal "democracy."

Washington was mindful of the public reaction in Russia. It must have been finally convinced and hugely disappointed that there would be no 'color revolution' there. Even the western media, which shows démodé (old fashioned) an archaic attitude, with a Cold War-style hostility against Putin, conceded, unwillingly, that anti-Putin demonstrations are by day getting more and more depleted.

This being the case, as one can suppose, Obama decided that he would have to go back on the offensive. The demonstration by the White House was cold, without even a trace of the heat that is always seen on those occasions considered festive, such as elections, in the world of "democracy."

Even prime minister David Cameron, of Great Britain, was more personal and warm, in spite of the fact that relations between Great Britain and Rússia have reached temperatures below zero.

The reference to "future cooperation" in light of the admission of Russia as a member of the World Trade Organization is interesting. Has Obama promised, yet again, that he will work for the cancellation of the Jackson-Vanik amendment to the trade embargo in 1974? Now, with Russia admitted as a member of the WTO, such an amendment is even more untenable.

Again, the differences between the U.S. and Russia on Syria and on the missile defense shield surfaced. And there is a clear reference to "an obstacle to better relations." But Iran and Afghanistan were listed as areas of cooperation. Hmm... Apparently, the 'reset' is very selective.

Putin will visit the U.S. at the G-8 meeting in May at Camp David. And Russia was also invited to the NATO summit in Chicago in May. Moscow responded that the decision to go or not to go will depend on advances in the discussions on the missile shield. But the official 'declaration' does not mention the NATO meeting.

Even though Obama took so long to welcome the election of Putin, the U.S. will be among the first countries that Putin will visit on trips abroad that he will make after returning to the Kremlin. But is that to be his first landing? My guess is that Putin will send a message, also, by visiting some of the former Soviet republics, before heading to Camp David.

This has left no doubt: Obama made it quite clear that Russia is not a priority of U.S. foreign policy. Moscow understood. It was a phone call that several others were also waiting for. People, for example, in Beijing, Tehran, Damascus and Islamabad.