No preaching needed from western quacks and charlatans

Vladimir Putin is not a man who can be bought, fooled, hoodwinked or silenced. That, in itself, is the major reason the western media, on behalf of its paymasters, seeks to demonize him and question his legitimacy as the next President of Russia. 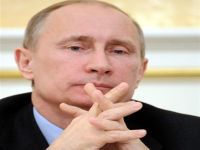 Vladimir Putin knows a site more of what democracy is about than all the western leaders combined. No rational person sees the definition of democracy as "willing to do what you are told by Washington and / or Tel Aviv." Thus is the western concept of democracy, coupled with bombs from 30,000 feet up, bullets and blackmail.

Violence and force are what western-style democracy is all about. I am afraid that Russia and the world community are not receptive to that concept.

A democracy does not say NO to free and fair supervised elections (as they did in Libya and are doing in Syria).

All the insolent pig-headed calling of a true democratic procedure a mockery will not hold water. The western media and leaders have been doing plenty of that.

America is now a crypto-fascist state, masquerading as a democracy. The European Union is a crypto-fascist entity, elected by no one, and certainly not acting according to the will of the people. No one elected NATO, either, to carry out foreign policy and world policeman duties.

As the next President of the Russian Federation said, "Suspension of the West's military aid to the Syrian opposition will make the rebel fighters sit down at the negotiating table...it's unacceptable to support one party to the conflict until it wipes out the other party." Pure and simple logic, obviously lost on the hypocritical, lying fascist western leaders, particularly the USA and despicable Hillary war zone Clinton.

Vladimir Putin also points out that authorities should react quickly to the people's demands and remarks that not only have they made their demands known in Russia, but throughout all the countries of Europe and the USA.

The Occupy Wall Street movement has spread like wildfire. All of this is basically a protest against the uneven distribution of wealth in the world, that one percent lives like stuffed pigs while the rest have to go without, hungry, starving, homeless, jobless, without health care.

The west most certainly cannot teach anyone about freedom, democracy, liberty, equality and justice. Their total disrespect for international law has been duly noted, as well as their inability to keep agreements they make.

But make no mistake, the western media has already been in full gear to discredit the Russian elections taking place tomorrow. They are so confident, arrogant and despicable that they have started the process well in advance.

However, this makes it much easier to awaken more and more people to their true demonic, evil, dishonest nature.

It would be wise to ignore their screaming, their lies, their machinations, their utterly repulisve noise, as they march in lockstep to their orders from the fascist privileged stuffed pig elites.

Perhaps these media pigs would like to discuss Florida and Ohio.. and hanging, dimpled or pregnant chads or how only someone rich, with rich backers and the backing of strong lobbies can be elected in a most undemocratic two party system, where third party candidates don't stand a prayer of serious consideration.

Vladimir Putin is the right man to lead Russia. Russia will serve as the vanguard of true democracy under President Vladimir Putin and the anti-fascist world movement which is gaining strength every day.