You can see this face nearly everywhere. It appears on magazine covers and in commercial ads on TV. However, few people may understand why this image has become a symbol of modern beauty. It's a cute face indeed, but there are many girls with such faces in the fashion business. However, there is only one man like that. Andrej Pejic has recently made his debut in the world of fashion, but the young man has already become a huge star. One may say that this man has given a new face to women's fashion. And it is the face of a man. 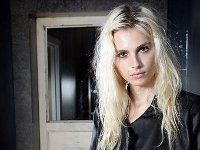 "Who's that blonde?" many people were asking each other during a show of men's collection in the summer of 2010. It is not hard to imagine people's reaction, when they were told that the fragile being wearing men's clothes was actually a male.

The editor of Vogue Italy was amazed with Andrej Pejic's photographs. It took Andrej only a year to become one of the world's highest-earning male models. However, he became even more successful when he "moved" to the world of women's fashion.

Andrej's mother is a Serbian; his father is a Croatian. The little boy grew up into a human being, whose male body is crowned with a female head. The man has large green eyes and full sensitive lips. His school years were far from being perfect, of course. His former classmates most likely envy him now a lot. Andrej only had to look like a woman to have an incredible career in fashion. Now the woman-looking man is successful, famous and rich.

When the young man sent his photo to an Australian model agency (his family moved to Australia from the war-torn Yugoslavia), the people in the agency thought that the "girl" looked like another model of theirs - Jessica Hart. They did not even bother to call Pejic. However, as soon as they found out that it was actually a man, they called him back immediately. It just so happens that they would have said say no to Andrej if he had been a  woman.

Indeed, there are many such girls on the runway. When you look at Andrej's photos, you are led to believe that you have already seen this before. This is exactly the reason why fashion photographers like to use Andrej's face in their photo shoots. They make him look like famous models such as Karolina Kurkova and others. At the end of last year, OUT Magazine recognized Pejic as an icon of style and published his nude photo, on which Andrej was posing with a python. That was a remake of a well-known photo with Nastassja Kinski from a 1981 issue of Vogue. The message of all that was clear: women are replaceable. It appears that in the future, female models will lose competition to androgynies.

FHM magazine included Pejic on the list of world's 100 sexiest women. Editors said that it happened incidentally. Andrej's photo found itself in the stack of the photos of other contenders. Many men happily voted for the beautiful blonde who was new on the list. It was too late when the mistake was discovered: the magazine had already been published.

However, two large bookstore networks refused to sell a fashion magazine with Pejic on the cover. The model was posing there semi-naked. Spokespeople for the companies said that the magazine could mislead many customers. Many could decide that there is a naked woman on the cover. As a matter of fact, the majority of American readers come across nudity in print publications almost every day. The networks were most likely confused about the duplicity of the model. They just did not want to be a part of the scandal.

Andrej Pezic himself claims that it does not really matter for him which sex he is related to. He would like people to see him the way he is. He also said that he had been studying the history of communism and socialism since he was 15. His idol is Karl Marx, the man said.

Pezic has become a gem for fashion designers too. They can celebrate a great victory indeed. For the last 20 years, they have been trying to create a new type of women: broad shoulders, narrow thighs and long arms and legs. Nature has given them its own creation, Andrej Pazic - the man who meets all requirements of women's beauty.