A Satire on Oscars 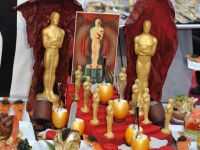 Well, well the Oscar Awards in Hollywood have been given out after nominations in various categories such as acting, directing, producing(?), costume designing, editing, music etc., etc. Surely the deserved ones got the ones they hoped to get. The others went home a wee disappointed I guess.

Disappointed since they felt they too deserved the Oscars for their varying performances on the wide screen.

Well stretch the wide screen even much wider and you have the world as an arena, an amphitheatre or a massive stage where all emotions are played out on a very regular basis these days, be it drama where tragedy, comedy, ethos, pathos and other varieties of emotions and actions are all regular full length features. Sometimes the actors are forced to perform their roles and some willingly. But these days the producers and the directors seem to be the same. Let the arena be Africa or the Middle East.

The producers want action packed adventures or misadventures, however one looks at them. The directors are all too willing to provide the same. It is the role of actors that attracts the attention here at one phase, at least the attention of a civilised section of the society.

The actors are a pathetic lot who don't derserve any Oscars. For they are full of forced pathos, bombed and strafed pathos. They seem to have no emotions apart from that and hence no Oscars for them!

The producers of the show are always in the hiding or in the shadows. Does anyone know who they are? I guess not! Some people call them Illuminati or the Bilderberg Group. It is said the very wealthy Rockefellers and the Rothschilds are the core part of the Producer group.

They certainly are an emotionless lot and to whom what matters is money and more money. Lots of it! Money washed and reddened with the glistening red liquid that seems to fascinate them, and of course the power that comes with the money. Ah, these guys deserve an Oscar for they have acted well! Acted innocent very well.

Now the Directors of the show: They have been pretty blatant about their intentions. They want the actors to bleed, get maimed, lose the infrastructure that could have been a lifeline for many of them. The actors don't deserve any appaluse or awards, they are pathetic!

Yes the directors of these mighty shows called "Shock and Awe Iraq" or "Low-Down on Libya" truly deserve the applause and Oscars, for they did a wonderful job of showing reality on the very large screen in an unknown language with no sub-titles.

Of course the other lot who don't derserve any accolades are the clap-boys, light-boys and others who also are called as foot soldiers. They have been too bland in their act, an emotionless lot whose job has been to shoot anything that moves in the opposite direction from their designated one. No, no Oscars for them either.

Oh yes! The biggest round of applause and Oscars must go to the set or the costume designers who tried to prove to the world that what they see on the wide screen is true, that is passing on the messages of Democracy, human rights etc. from 30,000 feet up, as in the case of Libya.

The rest of it, like regime change, etc. are "false propaganda carried on by Commies" they say. Yes, they are true Democrats and they deserve huge applause and the shining and curvy Oscars!

Now who is left from the group that deserve the shiny curvy Oscars? Oh yes, the comedians Sarkozy, Obama, Susan Rice, Cameron and others who think they have convinced and conquered the world with their acts of bravado!

And now they want more Oscars reserved for them in the coming years! And they may just get it for their upcoming shows on Syria and Iran. What say folks?