Contributions and challenges of rural women

Rural Women, Their Contributions and Challenges, to Be Highlighted at UN Commission on the Status of Women, 27 February - 9 March 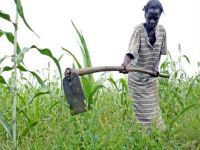 United Nations, New York -The 56th session of the Commission on the Status of Women will open on 27 February at United Nations headquarters, focused on the theme of empowerment of rural women and their role in poverty and hunger eradication, sustainable development and current challenges. The Commission will agree on urgent actions needed to make a real difference in the lives of millions of rural women. These recommendations will also provide input into other policy forums, such as the Rio+20 Conference in June 2012.

Rural women constitute one-fourth of the world's population. They are leaders, producers, entrepreneurs and service providers, and their contributions are vital to the well-being of families, communities and economies, and the achievement of the Millennium Development Goals. Rural women account for a great proportion of the agricultural labour force, produce the majority of food grown, especially in subsistence farming, and perform most of the unpaid care work in rural areas. Agriculture provides a livelihood for 86 percent of rural women and men and employment for about 1.3 billion smallholder farmers and landless workers; 43 percent are women. Yet, their rights and contributions have been largely overlooked. If rural women had equal access to productive resources, agricultural yields could reduce the number of chronically hungry people by between 100 and 150 million. However, studies show persistent gaps that impact the lives of rural women, including:

While women have equal property ownership rights in 115 countries and have equal inheritance rights in 93 countries, gender disparities in land holdings persist worldwide.

Only 5 percent of agricultural extension services are provided for women farmers, and in rural sub-Saharan Africa, women hold less than 10 percent of the credit available to smallholder agriculture.

Rural women also face more difficulty than men in accessing public services, social protection, employment and markets, due to cultural norms, security issues and lack of identification documents. For instance, recent UN Women research shows that the proportion of women without identification cards is as high as 80 percent in some villages in rural Egypt, which hampers their access to health, education, pensions, application for property title or deed, and other social services in addition to their ability to vote.

A recent study covering 17 countries in Asia and the Pacific shows that the proportion of elected representatives in rural councils who are women range from 0.6 percent to 37 percent.

The international community contributed USD 7.5 billion in official development assistance to rural development and the agricultural sector in 2008-2009. However, only 3 percent of the amount was allocated to programmes where gender equality was the main objective.

Bringing together government officials and representatives of the United Nations, civil society, the media and the private sector, the Commission will review progress and gaps and agree on actions to empower rural women. Panel discussions will also highlight financing for gender equality and the empowerment of women, the review theme for this year; along with the emerging issue of engaging young women and men, girls and boys in advancing gender equality; and the priority theme for next year - elimination and prevention of all forms of violence against women and girls.

The Commission will open in the UN General Assembly Hall on 27 February at 10:00 a.m., attended by the President of the Economic and Social Council His Excellency Miloš Koterec and UN Deputy-Secretary-General Asha-Rose Migiro. UN Under-Secretary-General and UN Women Executive Director Michelle Bachelet will deliver an opening statement. Deputy Director-General of the UN Food and Agricultural Organization, Ann Tutwiler, and Elisabeth Atangana from Cameroon, a farmer and leader of rural cooperatives, will also speak at the opening ceremony.