In recent years, the media are writing increasingly more about the deteriorating situation of the Jewish communities in Western Europe. Current concerns about the increasing anti-Semitism in various forms have led to an increase of relocation intents among European Jews. 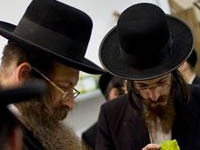 However, many politicians and public figures continue to express their determination to defend the economic, cultural and religious interests of the diaspora. Another question is whether it will be possible to preserve the influence of former Jewish communities in modern Europe.

The largest Jewish community in Western Europe resides in France (483,000 people). Paris alone has dozens of synagogues, kosher restaurants and a number of cultural organizations of the adherents of Judaism. However, it has not always been the case. Only 30-40 years ago one could hardly find a single restaurant with Jewish cuisine in France. Today Paris is home to approximately 350,000 Jews, Marseille - 70,000, Lyon - 25,000, Strasbourg - 16,000, Toulouse - 23,000, and Nice - 20,000.

The community organization is a well-developed structure that began to form in the era of Napoleon Bonaparte. The interests of the Jews are represented by Consistory - religious institutions, as well as a number of public organizations and foundations. The largest of them is the United Jewish Community Foundation.

In France over the past half century the community suffered a series of shocks associated with bursts of anti-Semitism, caused both by the events in the Middle East and internal factors. Many analysts link the growth of hostility towards Jews in the 1940-50s with the name of Charles de Gaulle who carried out the anti-Israeli policy.

The beginning of the 21st century was marked by a new surge of hostility towards Jews, which, in turn, was associated with the beginning of the first Palestinian Intifada in 2000. President Jacques Chirac has provided full support to Arab countries, and relations with Israel have deteriorated sharply.

The coming to power of Nicolas Sarkozy marked a change for the better for the French Jews. The current President does not hide his Jewish roots. Even as Interior Minister, Sarkozy firmly suppressed all manifestations of anti-Semitism.

However, the problem today is quite acute in France, and the police are not able to solve it. Two years ago the ranking of the countries with the highest expression of anti-Semitism was topped by Iran and France.

Over 500,000 Jews resided in Germany before the Second World War. Now approximately 200,000 of them live in the country. At some point, the state allocated significant funds for the repatriation of the Jews associated with the full recognition of German guilt for the crimes committed by the Nazis. German citizenship and social welfare payments were guaranteed by the government. Now it is somewhat more complicated than before to obtain a Jewish visa, and the funding for various programs of assistance to returnees was reduced.

The economic situation of the community has certainly worsened. Even more concerning for the followers of the Jewish tradition is the loss of historical and cultural heritage of the Jews in Germany. Many of them moved here from Russia and former Soviet republics soon after the collapse of the Soviet Union. Prior to 1989, there were about 30,000 Jews in Germany. Later another 200 thousand immigrants from the CIS countries moved here.

"Jewish families would often find themselves in the cities with no Jewish community. Therefore, there is a real danger that in 15-20 years the majority of Russian-speaking Jews who do not have strong ties to their national culture, and even more so the State of Israel, will be fully assimilated. Israeli government has no right to come to terms with the prospect of losing tens of thousands of fellow Jewish people," Alef David Schechter wrote with dismay in a magazine.

It should be noted that the "Russian" Jews do not always find common language with the local Jewish community. Religious traditions have been lost for 70 years of residence in the USSR. The traditionalists perceive immigrants from the Soviet Union more as Russians rather than Jews.

One of the largest Jewish communities is concentrated in the UK where 250,000 Jews reside. In England the adherents of Judaism are especially careful about the history and traditions of their people. This was described in a note of Simon Dovzhik - an Israeli immigrant who later moved to London.

Most of the Jews of the United Kingdom are the descendants of Jewish immigrants from the Russian Empire who came to the island at the beginning of the 20th century. British Jews, unlike the Israelis, are well aware of their own family trees and recall their ancestors with pride, surprisingly correctly pronouncing discordant for the English-speaking people names of the villages where their grandparents were born.

Just as in Germany and France, there is strong community infrastructure. In addition, thanks to the European Parliament the Jewish community officially defends its political and economic interests before the government.

Large Jewish communities are found in Spain - 40,000 people, Belgium - over 30,000, Italy - 28,000, and Netherlands - 30,000. Luxembourg is home to one of the smaller communities - approximately 600 people. Nevertheless, the Jews there retained their right to defend their interests through the Consistory - the official organization recognized by the Constitution.

Thanks to the European Jewish Congress Jews from 42 countries were able to cooperate with the UN, EU and OSCE at the highest level. More recently, at the initiative of Ukrainian businessmen Vadim Rabinovich and Igor Kolomoisky, a new organization has been created - the European Jewish Parliament.

This event caused significant controversy. To begin with, the creation of this body caused a great irritation on the part of nationalists and anti-Semites of all stripes who are dissatisfied with any attempt to gain influence in the political life of the Jews of Europe. However, the reaction of many in the diaspora to the creation of the parliament also proved controversial.

Despite some attempts to strengthen the position of the Jewish Diaspora in Europe, the current situation of Jews in countries such as France, Belgium and Holland remains shaky. Fear and insecurity are caused by the growth of anti-Semitism and Islamic fundamentalism.

For example, in France, a young Parisian Jew Ilan Halimi was kidnapped and brutally murdered in February of 2006. Then the French police admitted that the criminals had relationship with the Muslim environment. Increasingly, there are anti-Semitic incidents in Belgium and Holland where Jews have preferred not to appear on the streets wearing national attire.

Today, Jews in Western Europe are not so afraid of the right of anti-Semitism that does not manifest into the open terrorism. Another thing is the radical Islamists. The latter are incited by the threats of Islamists against European and American Jews from the Middle East. They are threatened by the retribution for the deaths of Palestinians in the Arab-Israeli wars.

The position of European Jews is largely precarious and their desire to relocate is understandable.