Translation, cultural inter-communication and the Momentum of Reciprocity

Translating Tabish Khair's "The Bus Stopped" into Hindi : Generating the Momentum of Reciprocity. 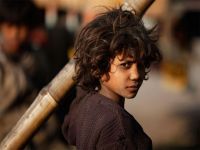 As a translator, who has translated both from Hindi to English and vice-versa, I have found that a loss in translation may occur due to the failure in communicating shared traditional beliefs from one culture/language to the Other. Although the risk remains throughout, this is largely so when the languages reflect 'different' cultural set-ups.

Translation is a mediation in languages and also in sensibilities. At any given moment a work chosen for translation into a "different" language gives up its claim on its own existence. George Steiner in his famous essay entitled "The Hermeneutic Motion" felt that after the translator has trusted a text and been "aggressive" in the sense of comprehending it and in the process " appropriating" it through a linguistic change, it is very close to understanding that a treasure has been extracted from the womb of mother Earth and yet an indelible scar still scalds her chest.

Steiner very aptly talked of how a text in translation gives birth to the relationship of "betrayal by augment" in that it enhances the value of the original internal structure. However, he did, at the very same time, pertinently point out that "where the native matrix is disoriented or immature, the importation will not enrich, it will not find a proper locale. It will generate not an integral response but a wash of mimicry."

The above statement brings us to what Aristotle called 'hermeneia'; the Aristotelian conception for discourse which signifies because it interprets and also Steiner's concept of 'Reciprocity' which exceeds the age-old concept of "fidelity' so popular in Translation Studies. Just like a mirror that not only reflects but generates light, a real translation must be able to equalise languages and cultures being talked of. As a translator, who has translated both from Hindi to English and vice-versa, I have found that a loss in translation may occur due to the failure in communicating shared traditional beliefs from one culture/language to the Other. Although the risk remains throughout, this is largely so when the languages reflect 'different' cultural set-ups.

However, in cases where the original texts/ languages become a vehicle for 'taking cultures across' and by that I mean that a translation becomes a means of ' bringing cultures home', the difficulty lies not so much in establishing a set of new linguistic norms to address the home-grown audiences, as in making the translated text an interesting piece of cultural-psychological interaction that establishes the possibility of cultural benefaction without any loss---and this is what I felt, while translating Tabish Khair's novel "The Bus Stopped" into Hindi.

"The Bus Stopped" is a very dynamic book. As a novelist who has his roots in India, Khair uses local registers of speech, quite some Hindi words and of course a culture which is strongly Indian in flavour. In the initial pages of the novel , for example, where the narrator recollects his childhood and the associated memories of a cherished Islamic background, as a translator, I had to be particularly aware and responsible for not losing out on even an iota of cultural information that the author of the text was putting across in the original work. This, I felt, intensified and expanded my moral vision to quite some extent. Interestingly, this happens more when one translates from English to Hindi, rather vice-versa, probably because, as a translator one feels 'more responsible' in 'bringing cultures home' because one is already in a way, aware of the prying critics around, who may, at one level, know about the culture more than the translator-interpreter does!

In that sense, translating Khair's novel, on one level, also meant for me, interacting with different communities and different world visions across lines of social differentiation. Khair's characters in "The Bus Stopped" have a local charm, a raw rusticity and also an urbane sophistication that so palpitates in and enlivens our normal Indian society. Whether he tells us about the tribal woman who has lost her newborn baby or the helping hand who helped in getting his master killed; or even when he talks of the lives of the eunuchs in the first person narrative, there is already a lot of that domestic appeal that any other translation would so desperately try to establish.

From this point of view, there were, for me, no issues  about an ideological resolution of creating a domestic culture which was already 'there'. Therefore, in most instances throughout the book, although literal translation has been the norm, for me, translation and rewriting with a 're-visioning' of the original have all gone hand in hand; and so it seeks to be a 'new story telling' even though it is the 'same story telling'.

This translation very strongly aims at those readers who would like to read Khair, but are not able to do it because of the Hindi-English market divide still proliferating the Indian literary scene; and I would say, that this is one way of imagining a happy reconciliation of those groups and cultural/linguistic differences that set us apart and do more harm than good.

Through an exploration of the cultural reserves that lay in the original, this translation into Hindi has tried to enhance levels of reciprocity through an appropriate exchange of linguistic energies. It is hoped that the linguistic rupture will lead to a cultural rapture of sorts and that this translation of "The Bus Stopped" into Hindi will go a step further in  fostering the momentum of reciprocity so eagerly desired of us all, in the field.