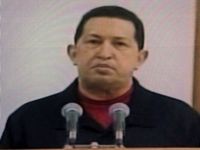 At the beginning of this year, President Hugo Chavez highlighted the government's achievements and gave an outlook on the coming decade. With the Chavez administration, Venezuela has made a great leap forward in many areas.

The United Nations (UN) and the Economic Commission for Latin America and the Caribbean (CEPAL) confirmed that the country is the least unequal in Latin America.

University enrollment in Venezuela is the highest on the continent, second only after Communist Cuba, and the fifth highest worldwide.

The Venezuelan people are thankful to the Comandante for improving their lives. Hugo Chavez's approval rating in December 2011 was 57%, according to a poll by GISXXI.

In his annual report he furthermore pointed out the areas where improvement is needed, reducing the crime rate and augmenting the employment rate.
A new Security Mission will tackle the problem of crime from a comprehensive point of view, analyzing the social elements and taking a humanistic approach.

Vice-President Elias Jaua commented, "The cultural element is the key. We have to keep deepening the promotion of values for life and peace, as opposed to a culture of violence. The role of the media is fundamental."

Venezuela has made great progress in implementing participatory democracy. The country has become the vanguard of "21st Century Socialism," which is based on equality, fraternity, liberty, justice and solidarity.

Its Bolivarian form in Venezuela includes the transformation of the economic model by increasing cooperativism and collective property created from the popular bases with the participation of the communities.

In the latest mission, the "Great Knowledge and Work Mission" (Gran Mision Saber y Trabajo), started at the beginning of 2012, more socialist values will be put into practice.

"We want to unleash popular creativity from below, participation and protagonism from the grassroots bases," Chavez said. "It is a constant battle against capitalism. We are not going to carry out the Great Knowledge and Work Mission in order to strengthen capitalist ideas. We must always ask ourselves, where is the socialism in this project?"

The "Great Knowledge and Work Mission" aims at reducing poverty by offering vocational training and jobs. It is part of the government's efforts to reduce the unemployment rate to 3% by 2018, according to Commerce Minister Edmee Betancourt.

The mission will create over 2.8 million new jobs between 2012 and 2018. It is being implemented in four steps: establishment of the legal framework, registration, job training and development of the productive model.

Half a million new jobs are to be created in the vast oil fields of the Faja del Orinoco, where crude oil is exploited on a grand scale with the help of Chinese and Russian companies.

Chavez announced that houses, hospitals, schools and sports facilities for the families working in the petrol industry will be built in the Faja del Orinoco. These new cities will be developed catering to the needs of the people, ensuring their overall education, health and well-being.

Since the beginning of the registration phase on January 14, over 100.000 people have signed up for the "Great Knowledge and Work Mission" in Caracas, the state of Miranda and the state of Vargas.

In February, the mobile registration points, which are set up in public plazas, will move west, to the Andean region, then south and east.

In March, the training stage of the mission is due to begin at 140 sites of the National Institute of Training and Socialist Education (INCES) across the country.

President Hugo Chavez's vision for the future of Venezuela is that of "a new fatherland, a happy fatherland." La patria nueva, la patria feliz.

15:03
Kaliningrad governor offers to give a map to the Polish President
13:53
Russian Security Council names the goals of the special operation in Ukraine
13:24
Medvdedev: Russia may deprive Japan of oil and gas
19:21
Ukraine names the cost of country's restoration and demands to take money from Russia
19:04
Russian MP suggests renaming Kaliningrad the way new reality dictates
17:46
Russian ice hockey player accused of dodging army service as he wants to sign up NHL
17:03
Protests in Uzbekistan: Authorities backpedal as 18 people killed
16:38
Zelensky's adviser says the surrender of Lysichansk is Ukraine's successful operation
15:59
Mysl Polska: Ukrainian refugees see Poland as a cash cow
15:52
Kyiv responds to the neutralization of 40 Nazis with a staged video
World
Czech general tells bad news to Zelensky