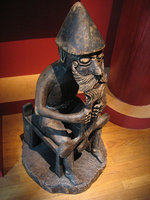 The inventor named his creation "Hammer." The ingenious doctor was weak, and feared the unexpected success of his invention. Joseph Mortimer Granville admitted in his little book on "the vibration of the nerves," written in 1883, that he would never test this device on women. He said that his invention most likely was meant to relax the clenched muscles in male patients.

"Hammer of Granville," as the invention was soon dubbed, made redundant a specific medical therapy practiced for centuries - a massage of the clitoris with fingers in patients with a diagnosis of "hysteria." This process is clearly shown in the comedy Hysteria by American director Tanya Wexler. The film shows that this method required a great deal of time, did not always lead to the desired result, and made the doctor's hand so tired that it had to be placed in a bowl of ice.  Physicians in antiquity also practiced this delicate hand work. The so-called hysteria (Greek word hysteria means "womb") was regarded as women's disease from the time of Hippocrates. The disease was believed to stem from the uterus and lead to stagnation of female juices in the body.

Hippocrates, who gave it the name "hysteria", first described the hysterical aphonia (lack of voice in the preservation of sonority whisper voice), that a patient of his suffered from. Only Aretha Cappadocia (approximately 1st-2nd century AD), considered hysteria a chronic disease that manifested itself in young women. He also suggested that men could also develop the symptoms of hysteria.

To solve the female problem, doctors were charged with summoning "hysterical crisis" through a genital massage. In fact, it meant the female orgasm. Nevertheless, until the early twentieth century, no one perceived it as such. The prevailing view was that only normal sexual intercourse with a man could lead to satisfaction.

Ladies were enjoying the therapy. Wealthy women from the higher strata of society regularly visited their personal physicians. The massage was administered once a week, sometimes doctors have resorted to alternative procedures for stimulation. In the Middle Ages, they also repeatedly advised to conduct such activities with widows and nuns.

Various baths, Jacuzzi and spa treatments were very popular with European ladies of high society. British observer Therme Malvern back in 1851 wrote that after "hydrotherapy" women were happy as if "they drank champagne."

"Granville Hammer" delighted the American Samuel Spencer Wallian as "in five or ten minutes" he was able to solve the problem that previously required "at least an hour of careful manipulation."

The feminists' movement in the 1970s and the efforts of the American Conservative government under President Ronald Reagan helped the triumphant return of vibrators in the hands of American housewives. Under the framework of the campaign to combat AIDS a civil servant, U.S. military doctor, General Everett Koop in May of 1988 published an eight-page brochure where along with the use of condoms he also recommended to use vibrators.