Can children be taken away from their families?

In Russia's Arkhangelsk region, a 15-year-old girl, who was placed in an orphanage two months ago, committed suicide. Supposedly, Christina could not survive separation from her mother. The tragedy has once again raised the question: how effective is the work of social services and why the Russian government can take away children from their parents only because of the poverty of the latter? 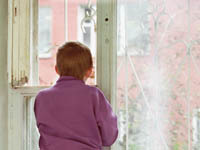 Three sisters - Christina, Karina and Carolina - were taken away from their parents two months ago. Social services decided that the girls were not provided proper conditions at home. Christina and Karina were sent to Severoonezhsk orphanage, and the youngest, Carolina, was placed in an orphanage in Arkhangelsk.

According to the deputy director of the orphanage, Christina was very homesick. Last weekend, the girl escaped from the facility and hung herself on a clothesline at an abandoned construction site.

"We are investigating this situation. The Ombudsman for Children in Arkhangelsk region traveled to Severoonezhsk orphanage. Of course, suicide in a child care facility is a serious emergency, and now prosecution is engaged. We will also clarify the legality of the removal of the children from the family," said spokesman of the press service of the Ombudsman for Children's Rights under the Russian president Pavel Astakhov.

The legitimacy of taking the children away from the family is an acute issue for Russia. There are about 90,000 orphans in Russian orphanages, where approximately two-thirds of them are social orphans, i.e., children with living parents.

In some cases, mothers and fathers themselves take children to an orphanage, in other cases children are taken by social services. Motivation of removal of children from families often becomes a topic for a debate. On the one hand, social services are blamed to allowing some disadvantaged parents torture their children for years. On the other, they are blamed for taking children from the mothers only because of poverty.

In Vologda region, local resident Boris Chernogortsev was preparing a lawsuit against the city authorities to indemnify and provide decent housing for his large family. A few months ago, when Chernogortsev first asked local authorities to help with housing, his two sons and a daughter were taken away. Social services concluded that children could not live in such appalling conditions and sent them to an orphanage, where one of the boys was seriously injured and is still recovering.

Later, according to NTV channel, the actions of the social services were deemed illegal. Chernogortsev was given his children back.

There is a great deal of similar stories in Russia every year, and it is unknown how many cases are not made public.

In an interview, commissioner of the President on Children's Rights Pavel Astakhov, answering the question of how to define the boundary between when it is necessary to help the mother, and when children should be taken away immediately, said: "If a person has not committed a crime against their children, they have a chance to correct the situation. It is my firm conviction. Even criminals have the opportunity for correction, but through other methods. Some mothers, of course, must go through a very difficult path for their rehabilitation, to prove that they will not cause harm to their children and create good conditions for them. There are good parents, there are bad ones. But they're all parents. Again, to me, as a lawyer, it is understandable that parents not only have certain rights regarding their children, but also obligations."

According to Astakhov, "mothers, on whom the welfare of children depends must be helped until they are back to normal human ways."

But, apparently, not all experts share Astakhov's view, quickly deciding on what is best for a given child.

In the case of Christina and her two sisters there is no clear answer yet. The law enforcement authorities have yet to decide if taking the girls from their mother was a right decision. However, it is very obvious that the system needs to be changed.

Recently we wrote about a bill introduced by the Russian president that provides for the creation of social control over children's rights. Local and federal committees will be created that will become "arbitrators" between the family and social services.

However, representatives of the parent community were concerned with the bill. "It is an old idea of ​​the adherents of juvenile justice. They are trying to create a system of pseudo-social control. Why pseudo? Such commissions would be funded by state grants, and therefore they will have to work closely with social services. Besides, they, like volunteers, will have no official duties and responsibilities. This means any sort of decision may be made by these committees, and nobody will complain," said Olga Letkova, representative of the Association of parents' committees and communities of Russia.

The author of the bill admitted that the document will raise many questions because "we are talking about interference with privacy, and there must be clear criteria for when it can be done, as well as punishment - if such interference was improper."